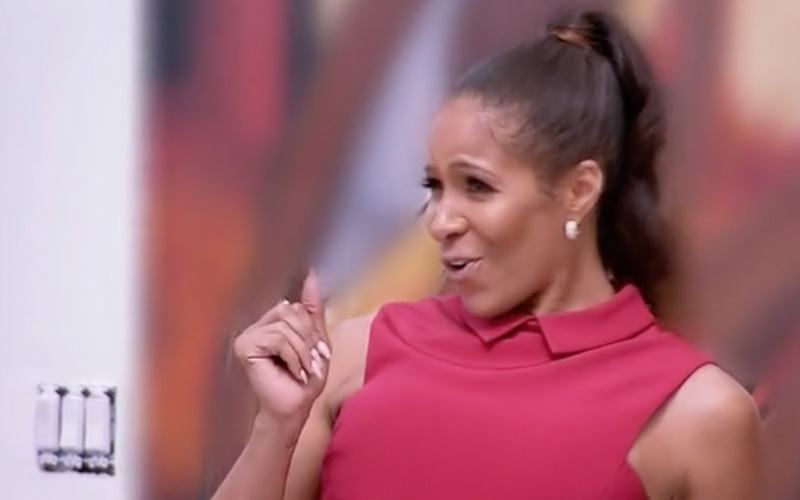 Our favorite shade-throwing Housewives made their official return to TV Sunday night (Nov. 6).

The Season 9 premiere of Real Housewives of Atlanta, titled “House of Shade and Dust,” mainly focused on bringing us up to speed on what’s been going on in everyone’s lives since we last left them.

Kandi and Todd are doting on their new baby boy, Ace Wells Tucker. Porsha is now attending anger management classes. Cynthia is making her divorce from Peter official. Phaedra is in the process of finalizing her divorce from Apollo. And Kenya and Sheree are still throwing shade over the fact that both of their houses, “Moore Manor” and “Chateau Sheree,” respectively, are still “under construction.”

Of course Twitter held NOTHING back as the episode aired, with viewers calling out Kenya for having a housewarming party in a house that’s not even finished (There was still contrucution equipment all over the house!), and Twitter as a whole basically LIVED for the shade Sheree threw at her, as well as the moment when Porsha crashed Kenya’s party.

Below, we have rounded up some of the best/funniest Tweets, jokes and memes from Real Housewives of Atlanta Season 9 Episode 1. Be prepared to ROFL.

How is Kenya having a housewarming in an incomplete house? They poured the driveway YESTERDAY? #RHOA pic.twitter.com/lb15NH51Z0

On Porsha “crashing” Kenya’s housewarming party and showing up as Phaedra’s “plus one”:

Sharee: Is Porsha Coming? Kenya: No I just I just wanna be safe Porsha: #RHOA pic.twitter.com/o2z6eKfq5q

Porsha is showing up this housewarming like…. #RHOA pic.twitter.com/JDo1kbkLe9

Kenya said she didn't invite Porsha because she wanted to be safe in her own home. But the gag is Porsha is on her way … Uninvited? #RHOA

On Kenya Moore’s shade-throwing and her “rental” boyfriend Matt Jordan (who decided to “crash” her housewarming party like Porsha):

I want us all to take note of all these shots Kenya is taking in episode ONE for when she starts playing victim at the reunion. #RHOA

I can't even judge Porsha…Kenya will make you want to knock her ass out, she starts stuff then plays the victim when shit gets real #RHOA

Kenya: "Matt and I were together a little under a year." *Contract up???#RHOA

#RHOA Matt showed up cuz Kenya invited him. Like w/ a time and date. Girl don't act like it's a driveby??

On how beautiful Chateau Sheree is and how Moore Manor pales in comparison:

It took Sheree 5 years to build her home, and every minute was worth it. #RHOA

On Cynthia and Peter’s failing marriage:

Of course you don't want alimony Cynthia, Peter ain't got no money to give lol #RHOA

Cynthia said there's been no infidelity in the relationship lmao she's in some serious denial. EVERYBODY KNOW PETER ASS A DAMN CHEATER.

This Cynthia and Peter facetime is awkward ? #RHOA

Cynthia: I'm here to get a divorce…
Meachum: from who…… Peter?

In her confessional interview, Kenya said something was “scary, like Porsha’s face without makeup.” Of course Twitter went IN on Kenya and her “oatmeal pie face.”

Kenya with the first set of shade ?? … porsha look better than you with or without makeup boo #RHOA

Wait. .Kenya want to talk about someone without makeup???? Porsha is still gorgeous without it. #RHOA

Porsha w|o makeup vs. Kenya w| makeup ?? SO WHAT YOU SAYIN #RHOA pic.twitter.com/XrLZp6fbxh

Porsha looks beautiful with or without make up. Let's be very clear #RHOA @Porsha4real @KenyaMoore pic.twitter.com/Dkwxel04PO

On Porsha and her anger management therapy:

They poke and poke at Porsha and then label her angry because she responds to their BS in a way that's unfavorable to them. #RHOA

so bravo made porsha get anger management to stay on the show. got it #RHOA

Anger management ? Porsha is just doing this to stay on the show. #RHOA

Why is Porsha all dressed up to go to anger management? It's therapy, not the Emmys. #RHOA