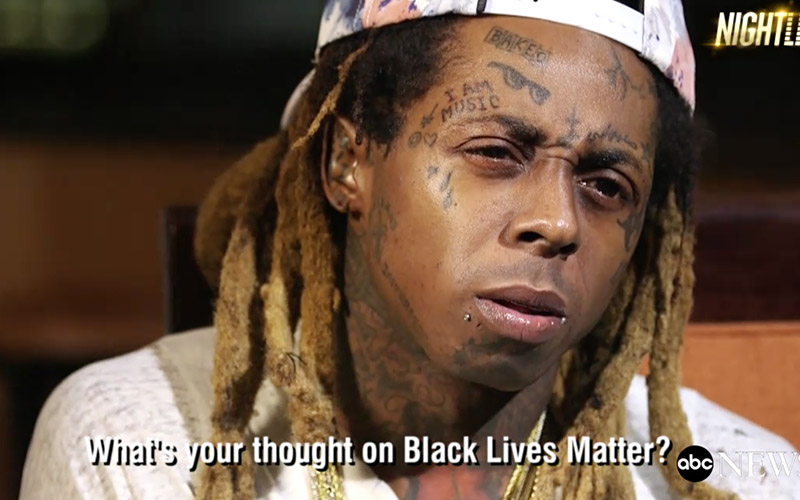 While most black celebrities and musicians are tripping all over themselves to appear and sound woke on social media, Lil Wayne can’t be bothered.

The New Orleans rapper sat down for an interview with ABC News’ Nightline program and in the interview, he confessed that he didn’t get what all the fuss was when it came to this whole Black Lives Matter thing. When the interviewer for his thoughts on the movement, his initial question was, “What is it? What do you mean?”

Seriously? Is this what we’re doing?

After the reporter breaks it down for Wayne, he says the incidents in which young black men have been killed by law enforcement are just “incidents in which someone got shot by a police officer for a fucked up reason.”

Is that all? Well, gee golly, wonder why we’ve been so bothered by any of this.

As if that wasn’t bad enough, Lil Wayne then points to his alleged wealth and success as evidence that black lives DO matter. And the final knife in the back of the black community comes when Wayne encourages black people to disconnect and mind their business. I guess we know that if Wayne was living in slavery times that he would’ve quietly stayed in the fields picking cotton and not worried himself at all with notions of freedom and independence.

I’m tempted to go in on Wayne but then I have to remember he’s a rape victim and a substance abuser. (And he has seizures.) His way of coping with life is to numb himself and not feel or care about anyone or anything. So of course he’s not going to get stirred up about issues of race and injustice. But still, it’d be nice if he’s at least keep his mouth shut and not sabotage the cause for the rest of us.