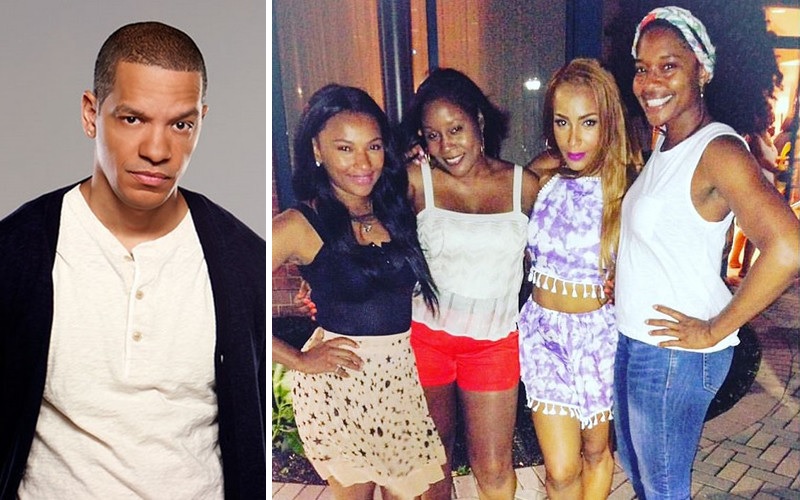 Imagine having all of your baby mamas and all of your kids in one place for a “family fun night.” It’s possible for this to actually happen. Surprisingly, Peter Gunz — of all people — just proved it.

Last weekend, Peter rented a bounce house and coordinated a “sister wives” type reunion with four of his six baby mamas so that his 10 kids could spend time together. Current wife Amina Buddafly and fellow Love & Hip Hop New York co-star Tara Wallace were both in attendance.

Cameras for LHHNY were obviously there to shoot footage for the upcoming season.

The three posted several photos of the family outing on Instagram. Tara even took a photo of Amina holding Tara and Peter’s son, Gunner, born in February. Remember, Tara and Amina were both pregnant by Peter at the same time. Amina gave birth to their daughter, Bronx, in August.

After many shared their shady thoughts on the photo, Peter reposted the pic and responded to the backlash. He wrote:

“Sad how people talk s—t about a photo that @iamtarawallace took… My kids will know and love one another as long as I’m alive no matter how adults feel about one another or me for that matter… love is in the air don’t hate on it embrace it.. goodnight world”

Photos show the baby mamas and the kids all getting along and having a good time. Amina and Tara even took pictures with Peter’s mother, Valerie Pankey Griffith.

@partyrentals1 thank u guys for making our family fun day even funner with this bounce house ❣kids loved it. And so did I 😆

Bronx, Cori @aminabuddafly and the Beautiful mother of my son Brandon Prince @ms._gina !! Told you love is in the air.. stay tuned

My family………my husband (hey honey, what you looking at ?) 😂😘❤️ LOVE YOU…… #familytime @iamtarawallace @aminabuddafly

Hold on, there’s more. We can’t forget this classic shot of the four baby mamas in attendance posing together.

Not that I'm the best dad it's that they have the best Moms !! 4 of the Beautiful mothers of my Kings and Queens…

A fan also recently caught Amina and Tara being civil, claiming their feud may be faked for the sake of the show. The clip shows Tara holding Amina’s infant daughter.

#PressPlay : Oop! Maybe it's for the kids.. Maybe they decided to be #SisterWives😩#TaraWallace X #AminaBuddafly 👀😩 #PeterGunz

What a ratchet TV show!