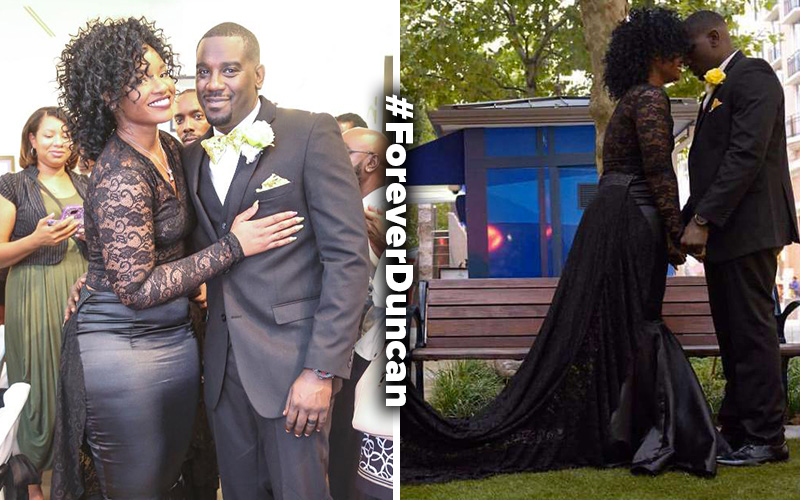 If you’ve been on social media at all over the past few days, you may have come across the hashtag #ForeverDuncan, which tells the story of Alfred and Sherrell Duncan — a beautiful couple who are currently the epitome of black love and #RelationshipGoals.

According to ForeverDuncan.com, a website setup showcasing the couple’s relationship and wedding, Alfred and Sherrell’s love story started back in 2007 when they were introduced to each other by a mutual friend at a nightclub in Washington, D.C.

The two kept in touch via social media over the years, and in 2013, after Alfred sent Sherrell a message on Facebook commending her on her weight-loss journey, she responded with her phone number. They dated for a few months and by the end of 2013, they “became a committed couple.”

Last New Year’s Eve (Dec. 31 2015) Alfred and Sherrell made the “difficult, but necessary decision” to abstain from sex until they were married, and 10 months later, on October 1st 2016, the couple made their romance official with a surprise wedding (well, to the bride, at least) in Maryland.

The wedding was a complete surprise to the bride. Sherrell was under the impression that they were having a competitive date day, in which she had to agree to do what Alfred said. He declared it “Servitude Day,” and he took her phone and began to execute his well thought-out plan. He proposed to her at noon, and had already planned a breathtaking wedding at 5pm, with all of their friends and family. Meanwhile, he posted the entire day in photos and video via both of their social media accounts.

Their love for one another is a true testament of what faith and God can do. “She makes me go harder, because I see how committed she is to transformation, family, and success. She pushes me, and makes sure that I put God first,” Alfred said of his new bride.

“He brings out the best in me, and he allows me to love God publicly because I see how God works through him. It lets me see how real God is everyday by watching his growth and transformation. God is the center of everything for us. The God in Alfred allows me to fall in love over again every single day,” Sherrell added.

Aww, how sweet! Here’s to nothing but love and happiness for the rest of their lives.

Keep scrolling to see how their magical day unfolded — including their “Servitude Day” date, the clever way Alfred got Sherrell to try on a black lace dress (that she would later find out was her wedding gown), the proposal video, and Sherrell’s reaction to her surprise wedding.

And so it begins. #foreverduncan. For those that know whats going on please feel free to post whatever you like. Please use hashtag #foreverduncan. Don’t worry. I have her phone. She won’t be able to see anything until its over.

Right before Alfred popped the question:

Right before I pop the question. She has no idea the kinda of day she is about to endure #foreverduncan

The moment Alfred popped the question. She said yes, obviously:

The moment Sherrell realized she was walking into her own wedding:

#ForeverDuncan… The emotions of Sherrell walking in to her surprise wedding to meet her groom Alfred… pic.twitter.com/7R9JnMgnOS

A post shared by Mrs. Duncan Remember the "R" ? (@sherrellthetrainer)

Proof that Sherrell and Alfred’s friends and family were in on the big surprise:

Drove to Maryland for a surprise wedding for Sherrell & Alfred! This is CRAZY exciting. Oh. My. Gawd! #ForeverDuncan! pic.twitter.com/iVsXTJ5mno A recap of their day:

From girlfriend to fiancé to wife… All in the same day. ???? #ForeverDuncan story is truly beautiful.

#ForeverDuncan I'm crying because I'm so happy and I don't even know y'all but I know God's love lives pic.twitter.com/enlMwcP7uM

Engaged and married in the same day? Her husband is a legend! Somebody needs to love me that much ??????? #foreverduncan

The #ForeverDuncan story had me looking at my man like pic.twitter.com/qYwmnJCRFY

I’m glad I got married before this #ForeverDuncan stunt. He put all types of unnecessary pressure on the fellas

#ForeverDuncan is what it's like to put God in the center of your relationship. They were obedient!

#Repost Lol yep!!! Planned a whole wedding and some of these dudes can't even plan a date night! Start putting in effort! #ForeverDuncan pic.twitter.com/rZB4hqKr68

The #foreverduncan hashtag on Instagram and Facebook. LORD THE TEARS! Proposed at 12, told her they were getting engagement photos… SIKE! pic.twitter.com/QfKF8Ig8wi

She went to bed his girlfriend. Became his fiancé later that day. His wife before she closed her eyes that night. #Legendary #ForeverDuncan