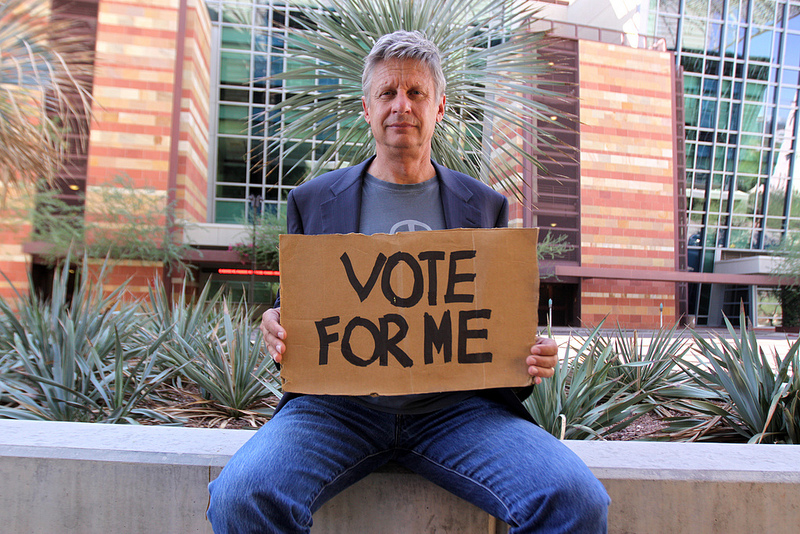 For anyone unhappy with only having Hillary Clinton and Donald Trump to choose between for president (see: a lot of people), the hope that a viable third party option would present itself is very high. Libertarian Gary Johnson was that person for many people.

Almost 1 million people have signed a petition to let Johnson participate in the presidential debates, one poll shows him winning 37% of the military vote, and the Quinnipiac poll has him at 13% of all eligible voters.

And sure, on the surface it’s easy to understand why. He’s a middling candidate, socially liberal and economically conservative, which in the age of uber-partisanship sounds nice.

But if you do any digging on Gary Johnson, or just watch him on the campaign trail, you quickly begin to realize that he may not be as presidential as one would hope.

Here are five times Gary Johnson looked like a fool while campaigning.

I’m sure if I went out to the streets today and asked strangers what their thoughts on Aleppo are, I’d get a lot of blank stares or dumb answers. And that’s understandable. Not knowing about the war-torn Syrian city is OK for Joe-Schmo (or even some journalists), but for a presidential candidate to not know about one of the most crucial overseas crises is troubling.

Presidents are the leaders of our military and have a heavy hand in our foreign policy, so we kind of want them to, you know, know about foreign policy. And while this one gaffe doesn’t mean he couldn’t effectively negotiate with other counties, it also doesn’t look good.

2. “Nobody got hurt” in recent bombing in Manhattan.

Earlier this month, New York City was rocked when a homemade bomb exploded in the Chelsea district with another one found just four blocks away. The blast injured twenty-nine people and sparked a manhunt for the man responsible.

So in an interview the following week, it was once again troubling to hear Gary Johnson say that he was, “just grateful that nobody got hurt.” And while no one was killed in the bombing, this is just another case of the hopeful leader of the free world not being up to date on the latest happenings, even in the country he wants to run.

Back in June, Johnson was at Politicon, a self-described “unconventional political convention,” which should have been perfect for him, seeing as how, as a third party candidate, his campaign is anything but conventional. But things again took a turn for the worst when Johnson began wandering around the convention to talk to voters and do interviews.

When an aid directed him to a room in the convention center that was named for Harriet Tubman, Johnson quickly asked, “Who’s Harriet Tubman?” When he was reminded, his response was that she will appear on the new twenty-dollar bill.

4. “The sun is going to actually grow and encompass the Earth, right? So global warming is in our future.”

Back in 2011, Johnson offered up his views on global warming. It started out pretty well, with him saying the Earth is getting warmer and it’s likely caused by humans. But then, he said this:

Basically, battling global warming is not only too expensive, but ultimately, what does it matter? Because in the “long-term view” the Earth is going to be destroyed by the sun. So f*ck it.

5. I don’t even know what to say about this one.

Last but not least in the “why Gary Johnson would be the weirdest president ever” list, there’s this little interview done last week. When discussing his desire to participate in the upcoming presidential debates, Johnson decided that that was a good time to stick his tongue out. Why? Who the hell knows.

So to you nearly million people out there hoping Johnson can somehow make history and beat both Clinton and Trump, just understand what you’re getting into. He would be, without a doubt, one of the weirdest presidents we’ve ever had.