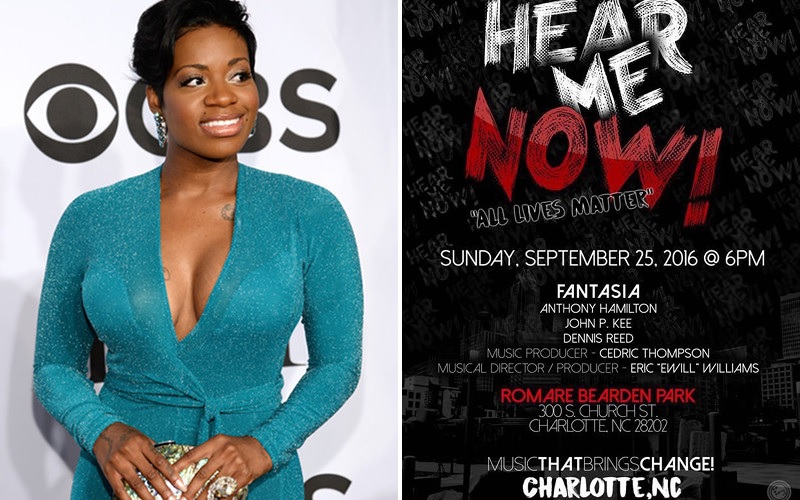 Welp, God spoke to Fantasia and told her jump on the Kevin Gates/The Game/Keke Palmer train. In light of the killing of yet another unarmed black man by a police officer, the singer felt it in her spirit to hold an “All Lives Matter” concert.

Fantasia was set to headline a concert in Charlotte, NC on Sunday (Sept. 25) featuring other artists such as Anthony Hamilton and John P. Kee. The event was titled “Hear Me Now! All Lives Matter.”

Charlotte is currently dealing with the aftermath of the police shooting of Keith Lamont Scott. North Carolina also happens to be Fantasia’s home state. Needless to say, many were not feeling Fantasia’s “ALM” declaration which has been used to minimize and dismiss the Black Lives Matter movement.

Fantasia's career is already on its 4th life and she goes and pulls some mess like this? pic.twitter.com/I2SpPAfwUF

When someone finally reads that flyer to Fantasia, she is gonna be PISSED! pic.twitter.com/y6tTgWlGlI

We basically taught Fantasia how to read & she wanna betray us for All Lives Matter? Bet

Ultimately, the concert had to be cancelled, supposedly because of crowds attending the Panthers game, though social media outrage and backlash may have also been a factor.

Tasia and her husband explained in a Facebook Live recording why she felt it was important to hold an “All Lives Matter” concert. “God laid it on my heart to do this,” she said.

“Two thousand years ago, Jesus ended the debate on which lives matter. He died for all us. All of us. Martin Luther King stood for love and unity for all people. United we stand, divided we fall. Let’s all stand together. So black lives matter, yes they do. All lives matter.”

Hamilton posted his own message, telling his fans that he was unaware of the flyer. He says “All Lives Matter” was included without his approval and encouraged everyone to read an article he recently wrote regarding racism and injustice in America.

Fantasia’s concert has been rescheduled for next weekend. But she really might want to rethink the title!