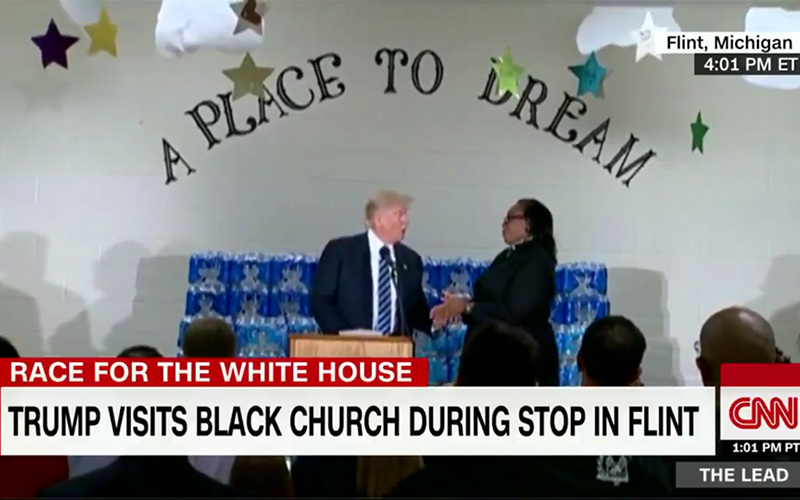 Welp, Donald Trump again visited a black church and, once again, had an awkward encounter. The Republican presidential nominee spoke at a church in Flint, Michigan to discuss the ongoing water crisis in the city and was brilliantly shut down by the pastor as he began to attack Hillary Clinton.

Trump was invited by Rev. Faith Green Timmons of Bethel United Methodist Church on Wednesday (Sept. 14). However, he really thought the negative bully tactics he’s become accustomed to was going to fly in the house of the Lord with about 50 black people sitting in the audience.

He began to criticize Clinton’s positions on economy and foreign policy. “Everything she touched didn’t work out. Now, Hillary Clinton…” he says until the pastor interrupts.

Flint pastor interrupts Trump: I didn't invite you to "give a political speech" https://t.co/EC0J9AozPY pic.twitter.com/L0pvY7sw9K

“Mr. Trump, I invited you here to thank us for what we’ve done for Flint, not to give a political speech”

Of course Trump’s feelings were a little hurt, so he ran to Fox News to slam the pastor for interrupting his speech. Appearing on Fox & Friends, he says he knew “something was up” from the beginning.

But according to NPR reporter Scott Detrow, who was at the church covering Trump’s appearance, Rev. Timmons did not seem nervous. In fact, Rev. Timmons reportedly even defended the candidate against hecklers.

That isn’t true. In fact, several audience members began to heckle Trump, asking pointed questions about whether he racially discriminated against black tenants as a landlord.

And that’s when Timmons — who Trump said Thursday had planned to ambush him — stepped in to defend Trump, saying the Republican nominee was ‘a guest of my church, and you will respect him.’

Despite slamming the black pastor and his low favorability ratings with African-Americans, Trump still hopes to capture the black vote. “What do [African-Americans] have to lose?” he said during his Fox & Friends interview.