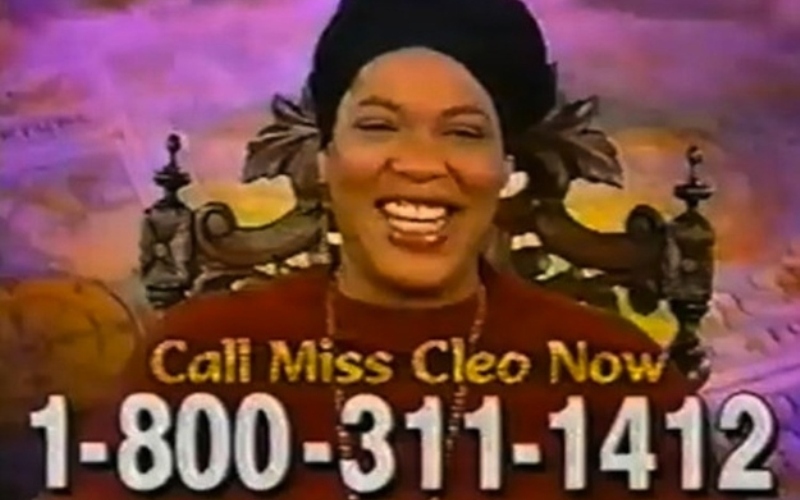 If you’re a 90s kid like me, then the catchphrase “Call me now!” must bring back some fond memories. Sadly, our favorite TV psychic, Miss Cleo has passed away at the age of 53.

Miss Cleo (real name Youree Harris) died in Palm Beach, Florida due to a battle with colon cancer. She was recently hospitalized, but was transferred to a hospice center last week.

Harris is best known for being a spokesperson for the psychic call service, Psychic Readers Network from 1997-2003. Using the name “Miss Cleo,” Harris claimed to be a psychic and Tarot card reader from Jamaica. In actuality, Harris was born and raised in Los Angeles, with American citizen parents.

However, her signature “Call me now!” tagline and humorous on-air “readings” catapulted her to 1990s pop culture icon status, though she was not always comfortable with the fame. “But there are places where I go and people are like, ‘Yo! Miss Cleo!’ and I try to run,” she once said.

“I was always bothered by the fact that, you know, people took the ‘Call me now’ quote very earnestly,” she said in a 2014 interview with Vice. “I was at Best Buy one day, and a gentleman said, ‘Miss Cleo, aren’t you supposed to be on the phone?’ I said, ‘Honey, do you really think that I do that while I’m traveling and doing press?’ I said, ‘You have a better chance of talking to me right here than you do if you called.”

Harris did some voiceover work after leaving her psychic gig, including the character Auntie Poulet in Grand Theft Auto: Vice City. But what we will always treasure is the lady that made “Call me now!” an iconic statement.