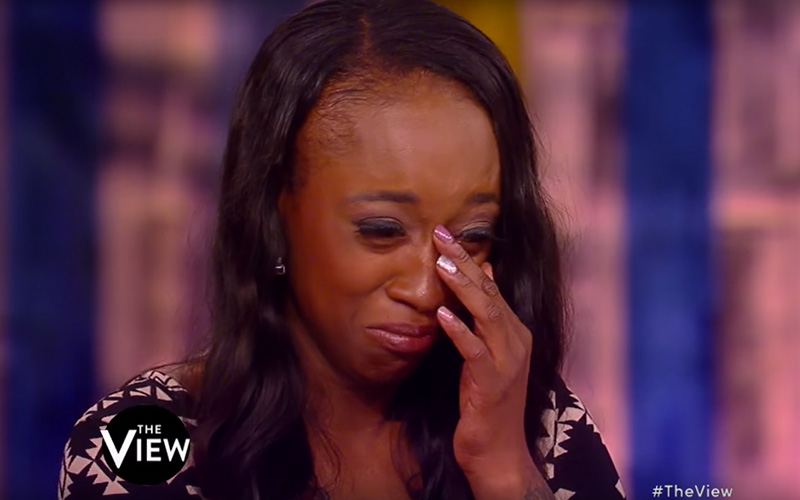 The incredibly composed woman that captured the aftermath of Philando Castile’s shooting by a police officer continues to share her story with the media. Diamond Reynolds recently appeared on The View and had an emotional conversation with the co-hosts.

Reynolds teared up as she spoke about her fiancé’s character and how his death has affected her and her four-year-old daughter. She described Castile as “sincere,” “loving,” and “great man” that would never initially bring harm to anyone.

She explained her daughter has “God dreams” of Castile. At a young age, she doesn’t quite understand death and says she wants to make soup for Castile because that would make him feel better.

Hearts broke as we watched and heard the young girl comfort her mother as she too witnessed Castile’s shooting from the backseat. Reynolds says her composure during the Facebook Live video was largely due to keeping her daughter calm and safe.

Though it was an extremely emotional interview, Reynolds addressed the problems with police brutality and how people of color are treated in our society. She said she had to film the shooting to ensure “my side, his side, our side of the story could be viewed by the people.”

Reynolds, with her lawyer present, once again stated they were pulled over for a broken taillight and Castile followed the officer’s orders. She said he did nothing to justify his murder after being asked what happened before she started recording.

I can’t imagine how Reynolds is grieving for her fiancé while also dealing with the emotional repercussions of the traumatic events. However, I commend her for sharing her and Castile’s story. The conversation of police brutality needs to continue and her efforts will only further the cause.