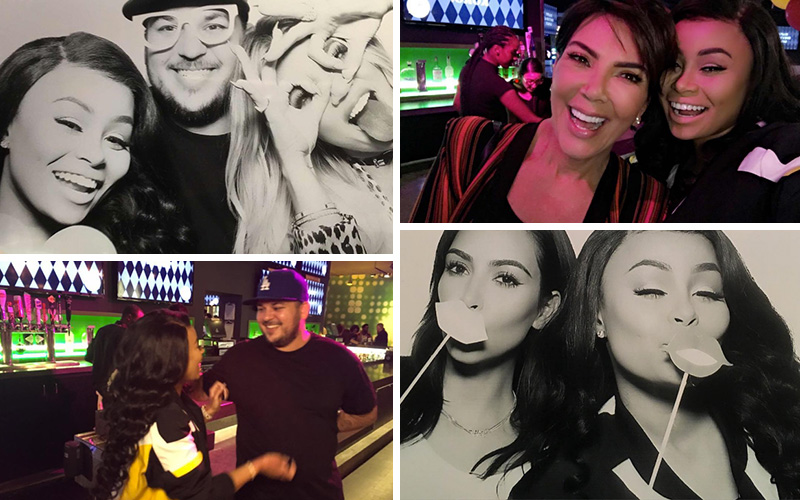 There appears to be a thaw in the frosty relationship between Rob Kardashian’s baby mama/fiancée Blac Chyna and the rest of the Kardashian clan.

Yes, more shocking than the fact that Khloe chose to celebrate her 32nd birthday at the arcade eatery Dave & Buster’s (you gotta love it when the Kardashians try to keep it real) was who was included on the guest list: Blac Chyna.

From the multitude of Instagram photos and videos, it appears a good time was had by all in attendance, including: Momager Kris, the birthday girl (Khloe), Kim, Kourtney, Kylie, Rob, Chrissy Teigen, John Legend, Scott Disick and Larsa Pippen.

In case you’ve been living under a rock, the Kardashians’ open-door policy towards Chyna is a huge deal. Bad blood has been in abundance between Chyna and Rob’s sisters thanks to a weirdly incestuous love square involving Rob, Chyna, Kylie and Kylie’s on-again, off-again boyfriend, Tyga. Chyna is also the mother of Tyga’s son, King Cairo.

The timing of this peace summit is a bit suspect since Sunday’s (June 26) episode of Keeping Up with the Kardashians focused on Rob’s family’s reaction to being blindsided by the news of his engagement online while on a vacay in Colorado. Their reactions ranged from hurt to angry, and nobody was thrilled for the happy couple.

Khloe really laid it on thick, posing with Chyna and Rob in a photo booth. Rob’s big sis supposedly bounced her brother from her crib in January after he started dating Chyna.

Is this newfound camaraderie going to stick? Only time will tell.