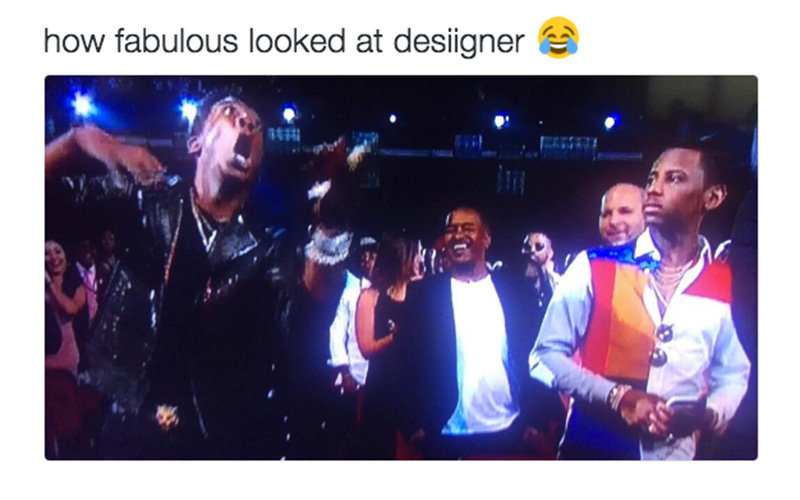 Desiigner spent the majority of his time on stage ferociously dancing, doing the Milly Rock, and throwing his mic up and down in the air. At one point, he jumped into the audience and got way too close to rapper Fabolous, who’s reaction was captured on camera and has already been made into a hilarious meme.

Fabolous appeared to be extremely annoyed and unamused by Desiigner invading his personal space. He later sent out a tweet saying that wasn’t the case. Too bad we don’t believe him.

how fabulous looked at desiigner ? pic.twitter.com/fzBuvpDqgw

Fab looking like he want to ask desiigner if he took his medication today https://t.co/HdcC9EzMOY

How Fabolous looked at Desiigner pic.twitter.com/eGv9ZQLLDN

He was on stage, I looked down at my phone for minute then I looked up & he was by me ??

The Internet also unleashed a host of other memes based on Desiigner’s performance, and they’re ROTFLMFAO funny.

SOMEONE REALLY PHOTOSHOPPED DESIIGNER GETTING THROWN OUT BY UNCLE PHILDSJKDSKJAHKHAKSGK pic.twitter.com/Cub3bJltQf

Man who did this to Desiigner?! ??? pic.twitter.com/DTdiPRyLFu

When the water too hot in the shower #Desiigner #BETAwards pic.twitter.com/UESfQNXEfp

Desiigner looks like that one lady in church that is extra af when the pastor says "can I get a witness?" pic.twitter.com/RjH4G88GrM