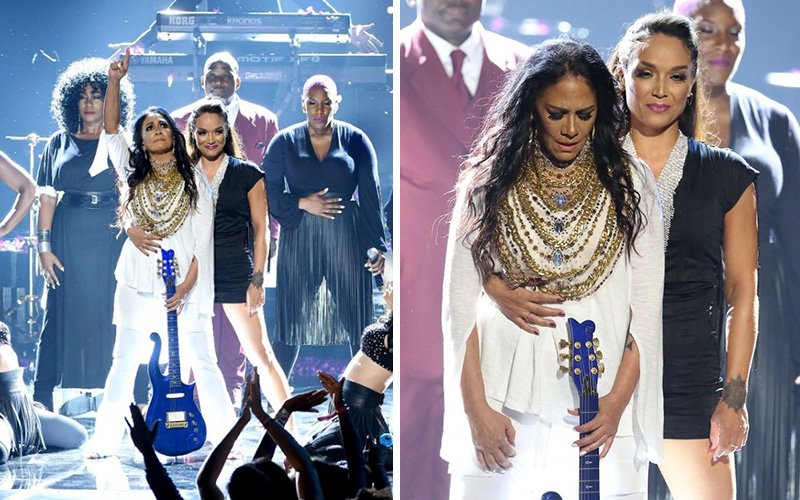 Would you look at that: Prince’s exes, on stage … TOGETHER!

It’s no surprise that Sheila E., a former lover of Prince and one of his many muses, would have the best tribute performance in honor of the late, great Purple One. But one thing that shocked viewers was the surprise appearance of Prince’s ex-wife Mayte Garcia joining in on the performance in a great display of not only showmanship, but also solidarity.

“Thank you @sheilaedrummer for putting this together and asking me to be a part of it,” Garcia wrote on Instagram on Sunday. “There is nobody else I would of done this tribute with !! And the whole group. The love was so strong on stage. I’m overwhelmed with emotions!! #gratefulbutsad.”

Prince and Mayte Garia met in 1990 when she was only 16 years old and she was hired to dance on his Diamonds an Pearls tour. She was the inspiration behind his 1995 hit “The Most Beautiful Girl in the World,” and the pair married on Valentine’s Day in 1996. The couple welcomed a son, Boy Gregory, that same year, but the infant died tragically of Pfeiffer syndrome just one week after birth. Prince and Garcia divorced in Jun 2000.

Though Prince and Sheila E. never married, the latter admitted in her memoir The Beat of My Own Drum that they actually got engaged at one point during their relationship throughout the 1980’s.

It was great seeing these two women who were romantically involved with Prince at drastically different points in his life come together to honor his memory on the biggest stage in Black entertainment.