GOSSIPONTHIS.COM Celebs Beyoncé Sneezed on Stage in NYC and Everyone Lost Their Collective Sh*t 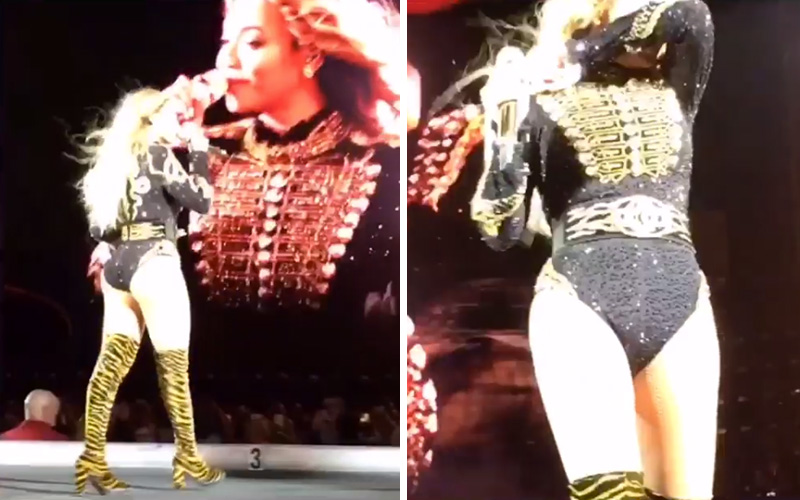 Amid the many major news developments this week — Hillary Clinton clinching the Democratic nomination for presidency, the tragic death of MMA fighter Kimbo Slice, the Cavaliers overcoming a 2-0 deficit in the NBA Finals — Beyoncé sneezed.

The sneeze happened while Beyoncé was performing for her “Formation” Tour in New York City Tuesday night (Jun 7) in front of a sold out crowd of about 45,000 fans, and everyone completely lost it.

In videos posted to social media, fans could be heard, in between screams and cheers, yelling “Bless you!”

I sneeze, Beyonce sneezes, therefore I am Beyonce. pic.twitter.com/8s2Z9AQ3Bc

Fans who attended the show immediately flocked to Twitter to announce to the world that they were able to witness something most people will never be able to see, and those who were simply hearing about the sneeze were equally impressed.

45,000 people just watched Beyoncé sneeze and we all cheered for her. #FormationWorldTour

Beyoncé just sneezed into the crook of her arm of her Gucci costume in between songs and it was very endearing.

That time @Beyonce sneezed on stage & the crowd melted ? she is real! #FormationWorldTour pic.twitter.com/hCR0nzUiw0

I saw @Beyonce sneeze on stage during the #FormationWorldTour and it changed my life.

Didn't even know Beyoncé could sneeze yo

Some Twitter users were jealous of the type of attention Beyoncé was getting for sneezing, and how ***Flawless it was:

I just sneezed and no one clapped. What happens when you're not #Beyonce #BeyonceSneeze

When Beyoncé sneezed at her concert she still looked flawless, but when I sneeze I look like a baby gorilla getting excited about a banana..

No one cheers for me when I sneeze. What is this horse shit?!#BeyonceSneeze

Beyonce sneezes and the world flips out. I sneeze and people walk away from me lol

Beyoncé sneezed at a concert and everyone went crazy. I sneezed at work and was told "you're not allowed to sneeze"

Beyoncé sneezed and a whole stadium full of strangers said bless you. My friends don't even say bless you when I sneeze

Then, there were the haters, of course, because a Beyoncé event is nothing without the haters:

It's a body function. We all sneeze. Why are people so hyped about Beyonce sneezing

I hope that Beyoncé didn't sneeze while she was lipping.

our minds are so little if we care about Beyonce sneezing. there's a bee crisis that no one cares about but we care about a sneeze ???

okay…. beyonce sneezed so what. millions of people sneeze everyday

Yes, millions of people do sneeze everyday. But they aren’t Beyoncé.

Meanwhile, we have a theory on where that little sneeze came from: