GOSSIPONTHIS.COM Pop Culture Chris Brown and Kevin McCall Drag Each Other to Hell & Back... 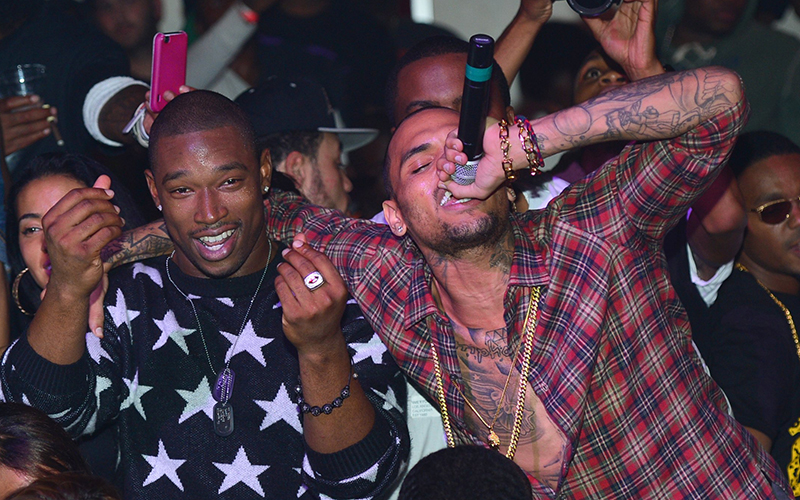 Chris Brown and Kevin McCall are still going at each other’s necks.

The two singers and former friends got into another heated exchange on social media, and this time Rihanna was brought into the mayhem.

The whole thing popped off when Kevin called Chris “glossy” after posting a pic of him and Balmain creative director Olivier Rousteing. “Hardcore rapper but he’s #GLOSSY,” Kevin wrote in the caption.

Once Chris caught wind of McCall’s remarks, he fired back in a lengthy Instagram post (that he has now deleted) accusing Kevin of being a rapist and a thief. Following his post, Chris took shots at Kevin in a series of videos on IG, calling him an “Ol’ Count Chocula face ass ni**a” and the only parent drunk at his child’s parent/teacher conference.

Chris also reminded Kevin that he still has him under contract and threatened to make him sing back-up for his daughter Royalty.

Kevin responded with a few threats of his own and warned Chris to not mention his baby mama Eva Marcille or his child ever again. He also denied the rape charges and really hit Breezy with a low blow by posting pics of Rihanna’s bruised face after the infamous 2009 incident. @chrisbrown im waiting for the day you stop tweeting & pick up a phone so this FADE can be Quicc . In honor of Kimbo can I bust your NOSE? ?

@chrisbrown aye mention my baby mama or kid again & your next show in L.A gonna be like a Trump rally! u said fucc my grandma remember? Wait

Kevin also went back and forth with fans who slammed him for posting the pic of RiRi and called him out about his rape charges.

don't say im a woman beater and I wont post pictures of a convicted One! Now yal stop think of what I deal with and im cool

I have two children I put a little more than hands on someone….Crazy sex will drive folk crazy if you let it! https://t.co/iBdIIvoipX

And that kinda. Behavior scares women and Twitter followers NOT real #Watts Nigga we ending all this outta town shit https://t.co/195EVaJbzT

I plead guilty to rape? When show me the documents they said I plead guilty RAPE and ill show you a white Jesus… https://t.co/utlhmwOO5b

@chrisbrown or is he a bitch for hitting one and being guilty of it…not just accused…deal with it! A real one coming for em

yup and so no one could ever accuse me of Rape…something your trying so hard to do but I've been prepared since 2005 for this!!

Kevin also brought Chris’ ex Karreuche Tran into the matter and called her his “bae,” to which Karrueche herself stepped in and quickly shut shit down.

#Baerruche I know that's you…stop Baereuche Tran!… before I make a baby with you & name her Loyalty Crown McCall https://t.co/JHRWOIhmFQ Chris and Kevin have been beefing on social media for months now.

Back in March, the two exchanged some pretty harsh words after Kevin publicly tweeted Chris, his mentor and label boss, asking him for a sit-down meeting to “handle some business.” And just last month, the two got into it again and things got really messy when Chris mentioned Kevin’s baby mamas and his grandmother.

This is starting to really get out of hand. Hopefully no one gets hurt.