GOSSIPONTHIS.COM Celebs Chris Brown and the Game Clap Back Against Homophobes on Social Media 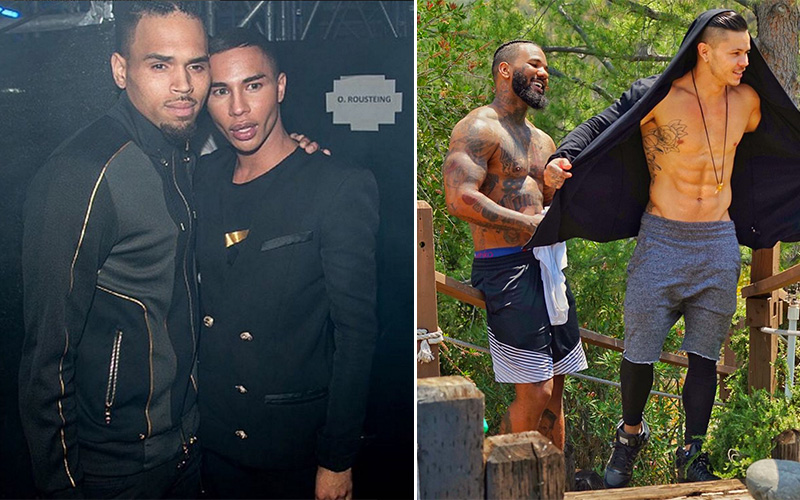 It’s no secret that hip-hop culture has historically had a serious problem when it comes to tolerance with LGBT folks. But here’s a little sign of hope: There is progress being made.

Chris Brown and the Game are two of the more ratchet and vocal members of the hip-hop set on social media. They’re light-skinned, tatted up, full of testosterone and very slick at the mouth. If you’re looking for someone to throw down with on the Tweets and the ‘Gram, these two will more than happily oblige you.

But recently, both Game and Chris Breezy used their fire-breathing mouths in defense of tolerance for gay people and against homophobia.

The Game was the first to get hit with a “Is you gay?” assault by his followers on social media after he posted a picture of his trainer, who was supposedly challenged by his “70-year-old pool man” to a push-up challenge. In the picture, his trainer, Brandon Schram, is showing off his washboard abs as he takes off his hoody. Game is in the background, also shirtless, enjoying a laugh at the challenge.

Apparently, the sight of two men in proximity to one another with their shirts off is enough to raise suspicions about either man’s sexuality. The trolls pounced in the comments. But Game was not having it this day or any other day.

The Game pulled out his super petty and went in on the Instagram user who dared to utter, “This is suspect.”

“You a skinny n***a wit a belly n hella bumps that need to be popped on your face…I’d chill if I was you pimple boy,” Game wrote.

Welp. Hopefully that young man won’t try that stunt again with Jayceon in the future.

Chris Brown found himself the target of similar social media trolls who accused him of being gay too after BallerAlert posted a picture of Chris with Balmain Creative Director Olivier Rousteing.

Just like in the incident with the Game, online trolls began to whisper about how “suspect” the photo of the two men appeared to be. Christopher did NOT take kindly to the discussion that unfolded in BallerAlert’s comments section and responded to Instagram user ricodelnegro who called the picture “fucking faggy.”

Chris rightly pointed out that he was now being called gay when he was previously called homophobic. Never one to miss out on an opportunity to step into some internet beef, Game swooped in behind Chris and lent a helping hand too.

The fragility of American masculinity is not to be understated or underestimated. And as celebrities, celebrity men like Chris and the Game bear the brunt of this discriminatory and suffocating attitude about what it means to be a “man.”

The good news is they appear to have evolved somewhat (let’s not give them TOO much credit yet) and are starting to push back against the narrative of what is and isn’t acceptable behavior for heterosexual men.

Let’s give these two high-yella fellas one gold star on their chart for this progressive step in the right direction, shall we?