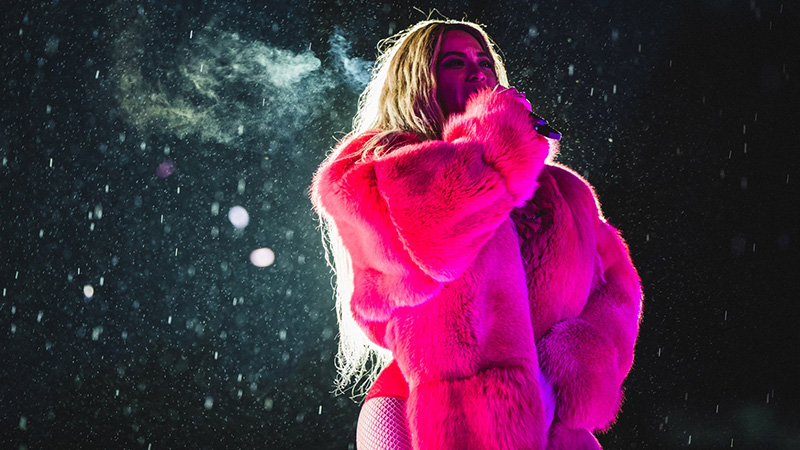 Add cold, rainy weather to the list of things that can’t stop Beyoncé from slaying on stage.

Beyoncé’s “Formation” World Tour stopped in the town of Edmonton in Alberta, Canada Friday night (May 20), and as usual, Queen Bey put on a spectacular 2-hour show that her fans will never forget. But this concert was a tad different, even for Beyoncé, apparently.

Fans were advised ahead of time to “dress warmly” and prepare for cold weather and a chance of rain.

BeyHivers attending the concert were also reminded that, like every date on the “Formation” World Tour, which is being performed exclusively at huge stadiums (some indoor, some outdoor), the show is rain or shine.

Some of Bey's best shows have come in the rain. Definitely the most memorable. https://t.co/NxKJUdhZqf

The temperature was dangerously close to freezing point. Any lower and it could have possibly sleeted or snowed. But the show must go on.

Beyoncé is on stage in Edmonton, current temperature is 5C/41F ? #FormationWorldTour

And Beyoncé came prepared. She switched up some of her stage costumes to include overcoats, and of course she looked amazing.

Gossip On This was in Raleigh, North Carolina earlier this month when a lightning storm (accompanied by heavy rain showers) forced us concertgoers to evacuate the Carter-Finley stadium for nearly an hour while the storm passed, which we thought was a big deal at the time.

But after hearing how the Canadian BeyHive had to battle the rain AND the freezing cold temperatures in Edmonton, we’re a bit more appreciative of our little lightning storm.

According to reports, the weather in Edmonton, Alberta (Canada) was a chilling 40 degrees Fahrenheit (about 4 degrees Celsius) throughout Beyoncé’s entire 2-hour set.

Beyoncé herself even acknowledged how cold it was outside, saying, “Can you feel your fingers? I can’t feel my fingers” after performing an acapella version of “Love on Top” with the crowd.

“I have to say this is the coldest show I’ve ever done,” she said before singing the show’s closing song Halo. “But it feels incredible.”

"I have to say this is the coldest show I've ever done, but it feels incredible." – Beyoncé in Edmonton #FWT pic.twitter.com/ibF6e3fbfz

Despite battling the freezing cold and the rain for over 2 hours, it was all worth it, according to fans on Twitter, because Beyoncé still put on an unforgettable show.

Wow. @Beyoncé & crew had their work cut out for them 5C & rain. Thx 4 putting on one heck of a show! #leadership #LeadersShowUp #GameOn

Mad love and props to @Beyonce! Helluva show and at the end the rain just made it more beautiful.
She must a been cold!#yeg

@Beyonce and her crew should be honorary Canadians after putting on such an amazing performance in the cold/rain! #FormationWorldTour #yeg

did I catch a cold from standing in the cold and rain for 4 hours ? Yes
Was it 100% worth it? YES @Beyonce F ME UP #FormationWorldTour ???

Last night was so crazy!It was super cold and we were super wet because of the rain but it was all worth it for Beyonce!#FormationWorldTour

If Beyoncé isn’t the greatest entertainer alive, please feel free to show us who is.

In the meantime, get your life in these pictures of Beyoncé slaying in rainy, 40-degree weather:

And check out this dope timelapse recorded a mile away from the stadium: