GOSSIPONTHIS.COM TV Rhonda and Anika Go At Each Other’s Throats in the Empire Season... 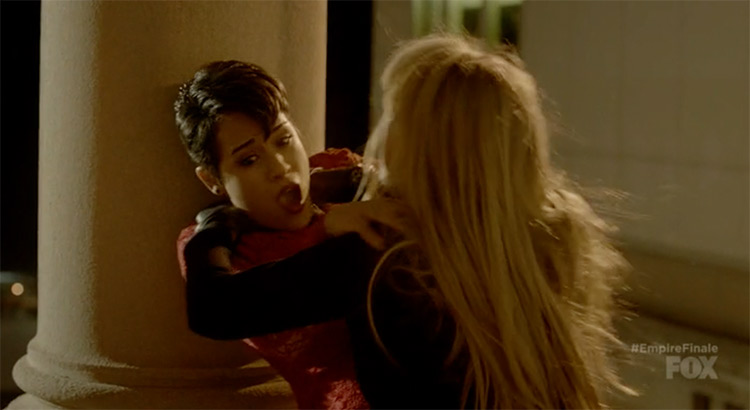 You want drama? Empire will give you drama!

Even though the show had a whopping 18 episodes this season to draw out the tensions and battles that they laid the foundation for at the start of the season, the writers instead opted for the kitchen sink approach and decided to tie up every loose end they could in 45 minutes.

That budding romance between Lucious and Cookie? Lucious admits he could never marry another.

That puppy love, co-dependent relationship between Hakeem and Laura? We get a wedding.

That suspicious nagging feeling Rhonda has that Anika might have had something to do with her tumble down the stairs? Rhonda jumps straight from suspicion to all-out assault and accusation.

Which is a really strange and bizarre twist because Rhonda went from being utterly clueless and ignorant about Anika’s devilish ways to highly woke and alert in a way that didn’t make sense given the evidence she had in front of her. At this point, the ONLY thing Rhonda is going off of to accuse Anika of murdering her baby is just a hazy memory of seeing the bottom of Anika’s Louboutins. That’s it.

Don’t the writers think we as an audience deserve something a bit meatier than that if we’re going to pull for Rhonda? And furthermore, doesn’t Anika’s character deserve a bit more nuance and exploration than she just shoved her friend down the steps because? Can we get some insights into her motivation? Surely she thought about the possibility that she’d get caught? Or did she have the ability to see into the future and know Rhonda would suffer from temporary amnesia after her fall.

It’s interesting that the season finale of Empire‘s second season is bookended by physical altercations between Rhonda and Anika. In the first eight minutes of the episode, Rhonda bursts into Lucious’ office and yells out, “I knew I heard your voice you evil bitch!” and then proceeds to grab Anika by the throat and punch her.

Can someone let me know when Rhonda joined Crime Mob? Because she is knuckin’ and buckin’ and ready to fight!

Of course, this is wildly inconsistent with her character’s behavior prior to this episode as she and Andre have operated behind the scenes and in the shadows. They know how to throw a rock and hide their hand. But who needs character development and consistency when you can have a cat fight on primetime television?

Where the stakes for Rhonda and Anika’s confrontation really get elevated though is by the end when Anika (now wedded to Lucious Lyon — like I said, they crammed a lot of shit in this episode) is confronted by an OJ-inspired Rhonda who again strangles her and attempts to throw her off the building. Andre catches the two ladies mid-struggle and as they battle it out on the ledge, the screen goes black and we hear a woman scream. Which woman fell off the building? You’ll have to wait till season 3.

If it feels like a cheap, tacky ploy to draw viewers back, that’s because it is, but Empire is shameless at doing whatever it takes to stir the pot. So take it for what it is.

He Brought Hookers to Your Son’s Wedding As far as classy affairs go, Hakeem’s wedding falls short on the list of must-see events. But for Shine Johnson, a rapper and producer from Lucious’ past, it’s the party of the century.

Although Laura’s parents are mortified at the prospect of Shine attending the wedding (he’s apparently well-known), Shine is excited to have an opportunity to put some hos on his arms and sip fancy stuff out of glasses.

Shine’s entrance, with a a few hookers surrounding him, is one of the more wow-worthy moments in the show and one of Lucious’ friends sums it up best, “He brought hookers to your son’s wedding…”

As far as low moments go, Shine Johnson’s trashy behavior ranks up there. Especially since Shine’s hos look so tired and too damn ghetto. After enduring endless flirting back and forth between Cookie and Lucious, we’re met with a splash of cold water to the face when Lucious proposes that he wed Anika in an attempt to prevent her from having to testify against him in court.

Earlier in the episode, Anika nearly threw herself off of a building at the thought of having to testify against Lucious in court (which seemed to be an overly dramatic response…). And Cookie extended her hand to Anika in friendship and even told her she was officially a Lyon now. Well, yes she is, and she took your, spot Cookie!

Seeing Anika come full circle, from being the rejected mistress to the official Mrs. Lyon is a bit surreal. While it’s something that is seemingly decided in an instant, after she’s served by surprise during Hakeem’s wedding, it’s a delicious return to form for Anika’s character. Anika was at her best when she was a foil and antagonist for Cookie. But for much of the season, she’s been a punching bag for the Lyon family and she’s begged and scrapped for attention and relevance.

As Mrs. Lyon, Anika will beg no more. The question though, is how will Cookie deal? We’ll have to wait and see how things shake out in season three.