GOSSIPONTHIS.COM Pop Culture Donald Trump to Latino Community: I Eat Tacos, Can We Be Friends... 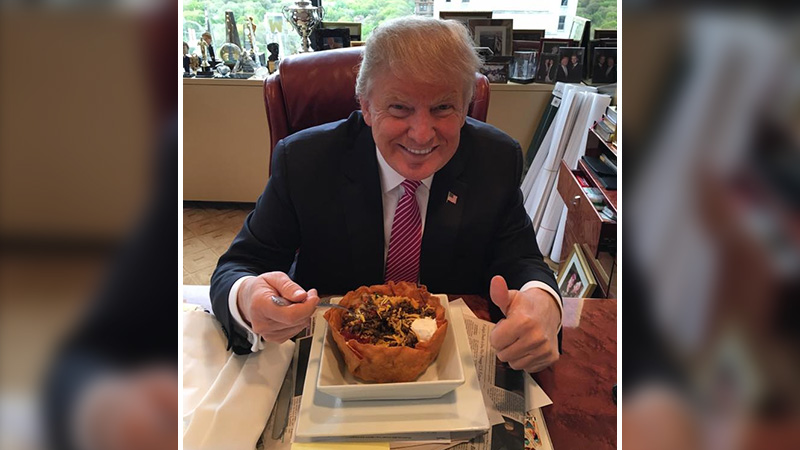 Now that Donald Trump has cleared the presidential candidate field on the Republican side, he knows it’s time to make amends and win over some of the individuals and minority groups he trampled on to secure his spot at the top of the GOP ticket.

Cinco de Mayo seemed like the perfect opportunity to show that it is “all bueno” with him and the Hispanics. But with Trump being Trump, he couldn’t help but douse his message to the community with a mouth-puckering dose of Trump egoism, sprinkled with light racist-patronizing.

Let’s have Trump’s words speak for themselves. This is the message Trump shared on his social media channels as a salute to the Latino community on Cinco de Mayo.

So…not only did Trump use the most stereotypical food to pander to the Hispanic community, he had the gall to pose with a cheap, non-Mexican variation of the taco (one conveniently produced by his own cafe). And then he said, “I love Hispanics.”

Does it get more insulting than that?

Part of me is impressed because just when I think Trump has sunk to the absolute bottom of the trolling barrel, he goes deeper.

The other part of me thinks, that Trump can’t seriously think that posing with his dusty toupee and a microwaved tortilla bowl of semi-Mexican inspired ingredients will smooth things over with a group of people he’s labeled as rapists, threatened to deport and plans to build a wall to keep out of this country. Like, does he really feel like Juan and Maria are gonna be like, “Oh, pero el senõr le gusta los tacos entonces…”

Black folks: It’s a good thing Black History Month is behind us. I shudder to think what kind of backhanded ass “compliment” he would’ve pulled out of his hat to show he loves the blacks. Then again, there’s still Kwanzaa coming up, so the worst might be ahead of us.