GOSSIPONTHIS.COM Pop Culture Crazy Prince Fan Sets Up GoFundMe to Raise $3,000 So She Can... 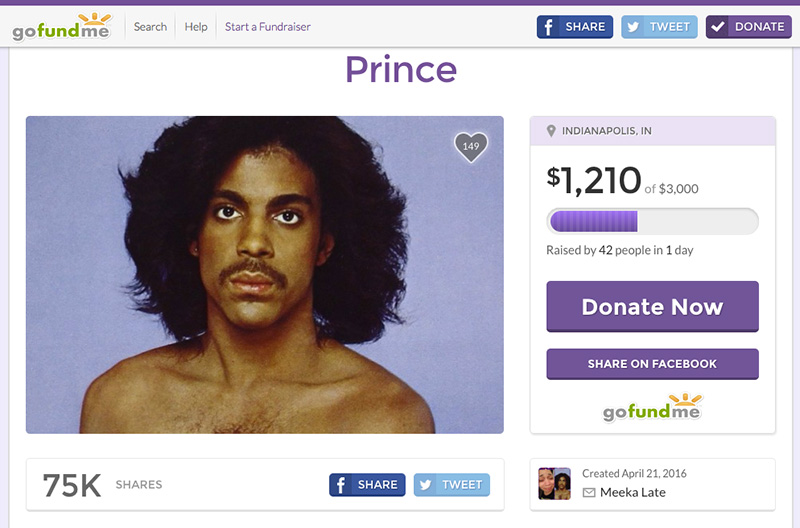 There is no denying that Prince Rogers Nelson, aka Prince to most, was a talented and legendary force in music. His unapologetic attitude and his daring creativity shaped our cultural landscape.

But what Prince is NOT is a ticket for a free ride.

Meeka Late, a so-called Prince fan, posted a desperate GoFundMe campaign begging and pleading for friends and strangers to contribute to her efforts to attend Prince’s funeral.

She’s seeking $3,000 and she gives no specifics on how she calculated that amount, especially since there hasn’t been any funeral information distributed. The most pathetic part, aside from her exhausting misspellings and piss-poor grammar, is this picture attempting to show her “crying” over Prince’s death. Meeka even has the nerve to zoom in on her face to give us a close-up of her “tears.”

Unfortunately, it just looks to me like she’s been sweating, not crying over the loss of Prince for hours on end.

Here’s Meeka’s pitch for you to give your hard-earned coins to her so she can attend Prince’s funeral:

Y’all know I love me some Prince… I just need y’all to help get me to his funeral. Lord I broke down in Sam’s Club… y’all I was on the floor SangN “Purple Rain”… This man was supposed to sAng “Darling Nikki ” at my wedding….. Lord help me make it through this!

Any donation will help.

So this bitch is out in here Sam’s Club giving sob-filled karaoke renditions of “Purple Rain?” I hope Sam’s Club is not her place of employment and she was just a shopper, cause she’s finna be out of a job otherwise if she keeps this foolery up.

As far as Prince singing “Darling Nikki” at her wedding:

1.) I highly doubt she’s dating and/or anywhere close to being proposed to, considering… nevermind.

2.) Is she really a Prince fan? Because a real Prince fan would know he doesn’t sing raunchy material from his catalogue like “Darling Nikki” since he became a Jehovah’s Witness.

So even though her pitch is an utter and complete joke, there appear to be enough kind souls on the Internet who are willing to give up their coins no matter how flawed the recipient is.