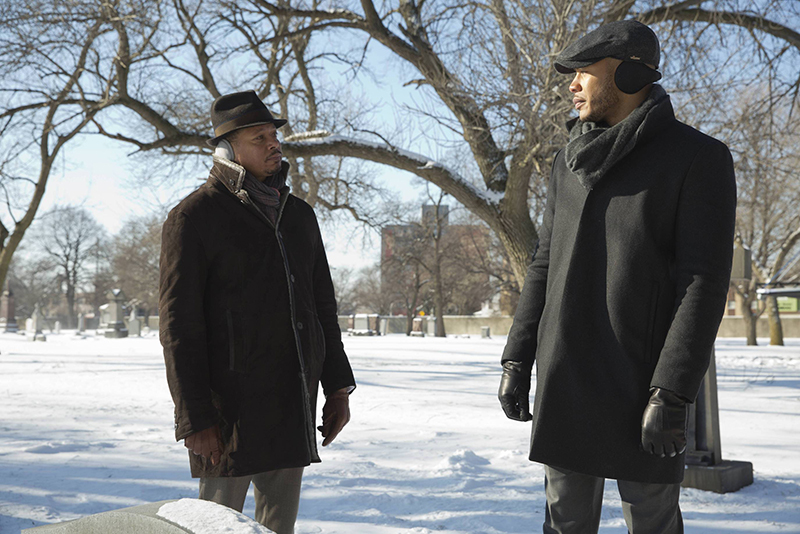 Sorry, y’all. I know you’re supposed to use the whole “SPOILER ALERT” thing, but hell, if you’re checking for a recap, it’s because you’re looking to find out what the heck happened, so I might as well tell you.

That’s right, Lucious Lyons’ mama, the one who was played by Kelly Rowland, is NOT dead. This bombshell was dropped on viewers in the last five minutes of the episode after watching Andre mourn and weep over his grandmother after learning that she too potentially suffered from bipolar disorder. We see her, rocking in her rocking chair in what looks like a nursing home.

Leah Mary Walker, which is the name we saw on her tombstone, is back. The strange thing about this reveal is that the grandma we see is far lighter than Kelly Rowland who played Lucious’ mother in flashback scenes earlier this season. I guess that nursing home she’s been hiding in for the past 30 years has a serious bleaching cream regimen?

Given that Lucious has to be in his 50s, since he has a grown son in his 30s, that would mean that Lucious’ mama is somewhere in her 70s or 80s. That means she’s not about to get up out of her walking chair and go toe-to-toe with Cookie. But perhaps she can play the role of an oracle, foreshadowing and predicting the twists and turns of the Lyon family saga.

Either way, keep your eyes peeled for how this plays out and let’s see what other dirt she might bring with her from Lucious’ childhood.

Hakeem Gets Schooled by Lucious Now that Camilla is dead and gone, Lucious is eager to reclaim his number one spot on the throne, even if that means unseating his own flesh and blood to do it.

Though Lucious usually takes things he wants by brute force, to unravel Hakeem’s position, he opts for mental warfare. Lucious sends his goons to sabotage an Empire concert and swindle goods from the Anthony and Cleopatra clothing line. The purpose of these shenanigans are to make Hakeem look like an incompetent CEO who is incapable of securing and responsibly managing Empire’s assets.

Knowing that Hakeem can’t blame him in public, Lucious succeeds in knocking his son back on his heels.

The kicker? The person who provided Lucious with all of the ammo he needs to take down Hakeem is none other than Andre. Yes, after Lucious insulted Andre to his core over his mental health issues, he successfully convinced Andre that he would help “do good” if he restored him as CEO of Empire.

Andre’s weakness, aside from his lack of confidence, is his burning desire to please his father. No matter what his father does or says to him, Andre will always go back to his father’s side because ultimately, it’s father’s approval that he seeks.

Hakeem is sadly unaware of his brother’s betrayal, but Cookie helps smooth things over once the crowd starts chanting for Lucious to return as CEO. She unites Lucious and Hakeem and reminding everyone that Empire was built on family. The handshake between the two men works and the shareholders seem appeased, for now. But what it means from a business standpoint at Empire is unclear. If you’ll recall from the previous episode, Jamal linked up with Freda Gatz in an attempt to frustrate his father. But it turns out that the two actually share an amazing musical chemistry.

The only problem? She’s Frank Gathers’ daughter and Lucious and Cookie were responsible for his death in prison.

Once Cookie realized WHO Freda was last episode, she quickly sets about dismantling Jamal’s newfound friendship with Freda. Unlike Lucious, Cookie is much better at hiding her hand. Rather than telling Jamal he can’t work with Freda, Cookie instead goes around and offers Jamal someone more impressive than Freda. In walks a female rapper named Stacy Run-Run. She’s clearly patterned after Nicki Minaj and she’s the hottest thing in female rap. Jamal is psyched to have her on the album at first but her collaboration with him comes with a catch: Stacy has an exclusivity clause in her contract (no other female rappers!) that means he has to boot Freda from the other tracks on his album.

Jamal is resistant at first, but Cookie twists his arm and he ultimately agrees to let Freda go. Poor Freda has had her heart broken by more Lyon men that you would ASSUME she’s been sleeping with them. But Freda, being the thuggish ruggish gangsta that she is, takes the loss on the chin and goes back to her day job as a barber.

While Jamal moves ahead with working with Stacy he quickly realizes that Stacy isn’t interested in working WITH him. She emailed her verses and Jamal has to record on his own to her contribution. This entire scene is interesting because it truly depicts the way most modern features and collaborations happen in music today. It’s rarely an in-person, organic collaboration. It’s hard to say if this is good or bad, though Jamal ultimately decides this method of collaboration is too cold for his liking. So he drops Stacy and goes back to the barber shop for Freda. Freda’s feelings are clearly hurt, so despite Jamal’s begging and pleading, she only says she MIGHT stop by the studio to finish the song he’s eager for her to jump back on.

Boo Boo Kitty Wants Back In Once upon a time, Anika Calhoun was the first lady of Empire. But that was a lifetime ago when Cookie was still in jail. Now, after being kicked to the curb by Lucious AND being used and discarded by his youngest son Hakeem, Anika is lurking in the shadows trying to creep her way back into the Lyon family.

The secret weapon she has in her arsenal? A pregnancy that she claims is Hakeem’s.

Anika reveals this secret to Andre and Rhonda, who are the only members of the Lyon family she’s still in touch with. Once they learn of the pregnancy, Rhonda and Andre arrange for a reunion with Lucious at the mansion. She’s not greeted warmly by Lucious, Cookie or Hakeem, but once she reveals that she’s carrying Hakeem’s baby, everything changes.

The exchange between Cookie, Anika and Hakeem here is classic Empire.

Cookie (to Hakeem): So you don’t know how to use a condom, stupid?

Oh, and if you’re wondering about Jamal’s lovechild, Lucious quickly confirms that Jamal’s alleged daughter is not genetically his and just like that, a sloppy, loose plot line gets tidied up in a jiffy.

Now that Anika is the only one carrying the heir to the Lyon dynasty, she apologizes for hurting the family in the past and asks to make amends because she just wants a happy family for her child. Anika is no fool though and if we know anything about her, she’s certainly after far more than just forgiveness and an invitation to Thanksgiving dinner.

The even bigger question of course is: Will Anika successfully carry this pregnancy to full term? The foreshadowing here suggests no, as when Lucious pops up at Anika’s house unexpectedly later in the episode, he not-so-subtly suggests that a misfortune, if you will, could spoil Anika’s plans.

“Be very careful. You know a lot of women, they don’t survive childbirth,” he says.

If Lucious adds killing babies to his long list of misdeeds, he’ll officially unseat Olivia Pope’s daddy on Scandal from his spot as worst TV dad ever.