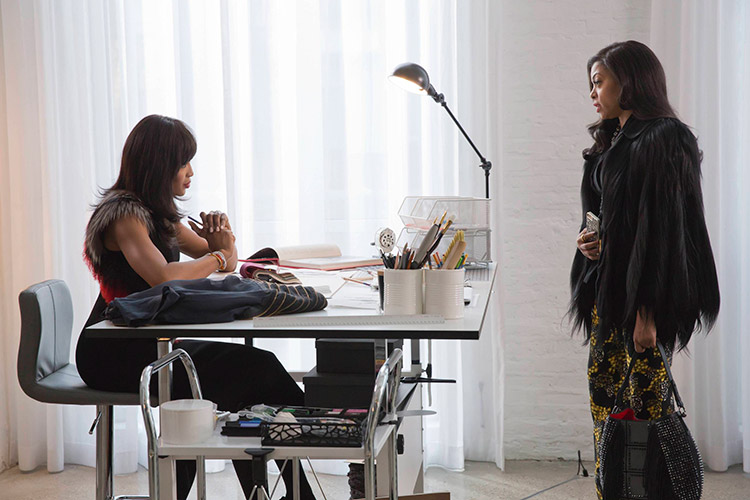 SPOILER ALERT: The following “Empire” Season 2 Episode 12 (“A Rose by Any Other Name”) recap contains MAJOR PLOT SPOILERS, so if you haven’t watched the episode yet, you might want to… you know… GO AWAY. No complaining in the comments! YOU HAVE BEEN WARNED!!!

After tormenting our televisions with dreadful acting and wreaking havoc on the Lyon family’s lives with her manipulation and games, we can all now rejoice as the witch (Camilla Marks-Whiteman) is officially dead.

Camilla, played by a stiff, dull and aging Naomi Campbell, has been purring in the background of Empire since Season 1 when she first started getting her cougar on with Hakeem.

We thought that she had been banished to the shadowlands, but this bitch’s creeper ass popped up earlier this season when she somehow managed to get in good with the lesbian chairwoman of the board, Mimi Whiteman (Marisa Tomei). Camilla played her part so well that she ended up being wifed by Camilla and ejecting Lucious from his role as Empire CEO. Which of course allowed Camilla step in and take full control.

This, as you can imagine, didn’t sit well with Ms. Cookie Lyon, and Cookie has been determined to unseat Camilla from her throne since Hakeem defected and voted to boot Lucious as CEO.

But Camilla isn’t going away that easily or quietly, so it’s up to Hakeem to restore the family to its leadership role within Empire. Hakeem shares a private moment with Camilla and manages whisper dirty things to her and get her to say nasty and candid things about how Camilla can’t wait for Mimi to die while he works the middle. Cookie’s reaction to Hakeem’s news was perfect: “Oh? You made a sex tape, huh, Ray J?”

No tea, no shade.

While Hakeem showed his diabolical side by backstabbing a woman who backstabbed on his behalf, it took the whole Lyon family to truly wipe Camilla out. Roaches sometimes need the whole can of Raid, know what I mean?

Once Lucious catches wind of the fact that Hakeem has succeeded in putting Camilla on the wrong side of Mimi, Lucious senses that Camilla won’t go away quietly on her own. So he decides to help knock her down for the count.

Lucious pays a visit to Camilla in her apartment and we find a limp and lifeless Mimi in the bathroom. Camilla has poisoned her and taken her out of the game. Undoubtedly, with Mimi’s death, Camilla stood to be restored since she was Camilla’s lawfully wedded wife.

But Lucious has other plans for Camilla. Using his razor-sharp persuasion skills, Lucious manages to convince her to kill herself, by swallowing the poison she gave to Mimi. You know you’re a bad motherfucker when you can convince someone to kill themselves without having to lift a single finger. Camilla takes the swig of the poison and goes down for the count. Sayonara, Naomi. It’s been real, you old lesbian, cougar witch.

Jamal Claps Back at Lucious and Spills a Family Secret Jamal is still suffering from the repercussions of his brief heterosexual fling with Skye (played by Alicia Keys). Last episode, Jamal dry humped a man and a woman on stage to prove he was still down with the gay mafia, but that hasn’t been enough to dampen down the frustration.

And how exactly do the gays get back at you when you fuck with them? Apparently, they get cheap Chinese flip-flops in every shade of the rainbow, clap them in your face and then sing along to your brother’s hit song “Drip Drop” with their own twist on it called “Flippity Flop.” Becky (Gabourey Sidibe) hilariously shouts at the crowd of gay men who protested Jamal’s brief heterosexuality with a song and dance worthy of Broadway saying, “It’s not even his song, stupid!” Lee Daniels really should ease up on binge watching Glee perhaps because it’s clearly influencing him a bit too much. Empire has always stretched the boundaries of “reality” but a flash dance mob as a form of protest is taking it a bit far.

Jamal, as he so often does on his show, decides to write a song of his own as a means of striking back. The song consists of him complaining and insisting that he’s not like his daddy once he realizes that his father set up the affair with Skye to purposefully leak the affair to the media so he’d lose the gay votes in the ASAs.

Lucious, you see, is going head to head with his son and he’s apparently determined to stop at nothing to make sure he comes home a winner. After winning Jameson over again, Jamal decides to perform his aggro-hip-hop anthem. Honestly, the whole thing is awkward. If you’re determined to win back the gays, why are you doing this rowdy, rough, DMX-style song? By the end of the performance, the crowd gathered to see Jamal looks bewildered. They applaud not because they get it, but because they don’t know what else to do with their hands. I mean, this whole segment is like “What if Sisqo decided to put out a rap battle song?” It’s really awkward.

Lucious, for his part, remains largely unbothered by Jamal’s reveal that his name isn’t really Lucious Lyon. Frankly, it’s a relief to him, or so he says. For this episode at least. Wait till the next one to confirm if it’s really real.

A Song for the Lyon Brothers While all of these executive musical chairs are going on at Empire, there’s a touching moment when Jamal and Hakeem team up to sing a song they dedicated to their brother Andre, who is struggling severely with the loss of his unborn son.

The breaking point comes toward the end of the episode when Andre decides to buy Empire stock after Mimi has dumped it all. The vehicle Andre uses to secure the Empire stock is a trust fund he set up for his son. After Andre hangs up, he tosses the smart phone down like it’s bouncy ball, which prompts Jamal and Hakeem to invite the clearly distressed Andre over to the studio to hear the song. As Andre sits through his brother’s tune of redemption and reflection, he can’t help but shed a tear.

While there’s a whole lot of ratchet on Empire, one of the consistently appealing things about the show is the strength of the Lyon brotherhood.

Through thick and thin, they stick together. Kind of like Bill Cosby’s Jell-O pudding. But less rapey.