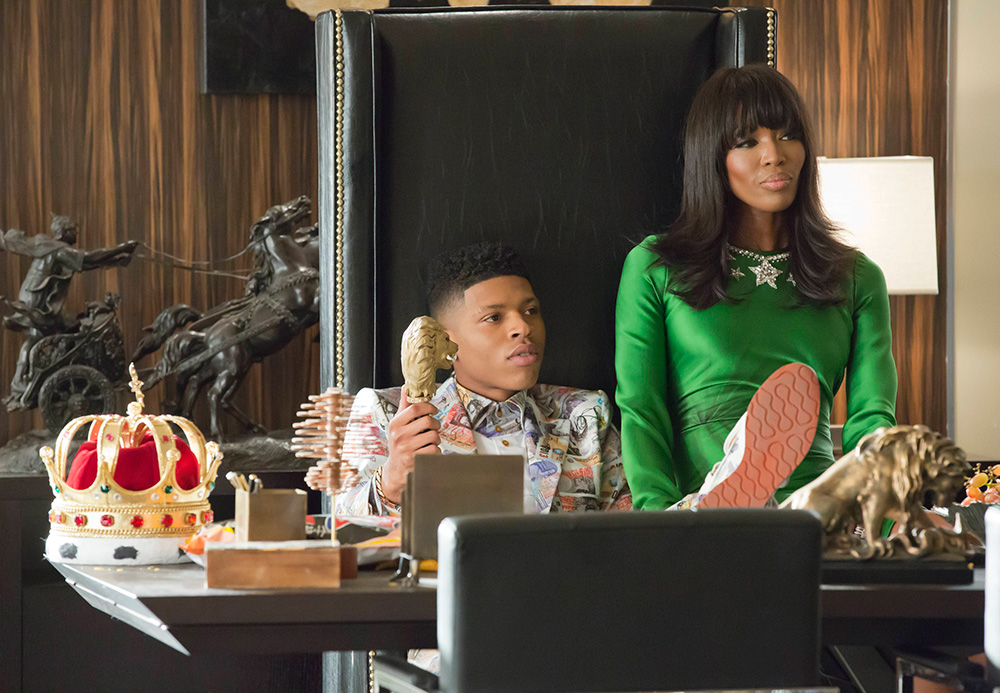 Who run the world? Not girls, Beyoncé. Naw, it’s the lil’ boy-prince otherwise known as Hakeem, who now is sitting high and mighty with old-pussy witch queen Camilla by his side.

But we’re getting ahead of ourselves here. We’ve gotta roll back to start where things left off with Empire before the series went on winter break.

When we last left the Lyon family, a shadowy figure decided to tip-toe around Andre’s house and give poor, pregnant Rhonda a good ol’ nasty shove down the steps.

And that’s exactly where season 2 episode 11, “Death Will Have His Way,” picks up, with pregnant Rhonda coughing, on the floor, in a pool of her own blood. After taking a nasty tumble, Rhonda is understandably dazed and on the verge of passing out, but she manages to make out a blurry figure stepping over her body and walking out the door. It looks like a woman (and let’s face it, Anika is suspect #1), but more importantly, whoever shoved Rhonda down the stairs has expensive taste in shoes. Nope. Your eyes do not deceive you. Those are red bottoms. Which means that Empire has a Louboutin baby killer on its hands. So keep your eyes peeled for those Loubs later on during the season so we can figure out who the pregnant predator is. In most families the eldest child is the blessed and favored one. But in the Lyon family, Andre is by far the most cursed and tormented son. Call Andre the black Job because this fool stay going through the nastiest trials and tribulations.

First, despite being the most educated, best-dressed and loyal Lyon son, Andre is passed over time and time again by his father as his younger brothers battle for the role of Empire CEO. As if that insult isn’t bad enough, he’s fired from the record company completely, then he’s revealed to be suffering from bipolar disorder and just when he wins back his father’s love and favor, he loses his unborn son.

As you can imagine, Andre goes over the edge when he learns about Rhonda’s accident and the death of his unborn child.

It’s a heart-wrenching scene and it’s moments like these that the family dynamic of Empire truly shines. Cookie, Jamal, and Lucious (and Hakeem from the back) rally around Andre and hold him as he breaks down while he processes the fact that his baby boy is gone. Lawd. All the feels.

Once Andre gets up from off the floor, he walks in and has a quiet chat with Rhonda. Lee Daniels is trying to do that whole tired debate about God letting bad things happen to good people. The unpleasant reality of this fact of life is a thinly veiled boost for atheism, which he uses Rhonda as a vessel for. It’s cliched, boring and unoriginal. But the ending scene with Rhonda lying limply in the hospital bed while Andre somberly sits by her side is still arresting and breathtaking. Later in the episode, there’s another heart-wrenching scene with Andre as he wanders through his unborn child’s nursery. As he walks through the empty room, he starts to crumble as he approaches the bassinet. Part of you can’t help but hope that Andre finds his happily ever after, but the other part of you knows that there’s just another tragedy waiting for him around the corner. Lee Daniels gives no fucks.

Anika Pays a Visit to Rhonda When we last left things off between Rhonda and Anika, aka Boo Boo Kitty, it was clear as day that Anika was not enamored with the idea that Rhonda would give birth to the heir to the Lyon empire and not her.

All clues, including the red bottoms, point to Boo Boo Kitty as the culprit in the pregnancy push-over, but knowing Lee Daniels, he’s likely dropping obvious hints that will make us think it’s Anika, only to reveal it’s Katt Williams who shoved Rhonda down the stairs. Stay woke, y’all.

Anyway, Anika puts on her fakest smile and her baddest bitch Hillary Clinton-style First Lady suit to pay Rhonda a visit in the hospital. The scene is meant to make Anika look guilty; she’s the crazed jealous woman who’s feigning concern for her friend when she’s actually the perpetrator. Rhonda is gullible and falls for Anika’s fake concern hook, line and sinker. You’d think Rhonda would have her guard up more considering the fact that Anika is clearly the Blac Chyna of the Lyon family. She will bed hop with whoever, whenever, as long as it gets her ahead. Stay tuned: Boo Boo Kitty’s claws are just getting sharpened.

NEXT: JAMAL VS. THE GAY MAFIA, HAKEEM STEALS THE THRONE