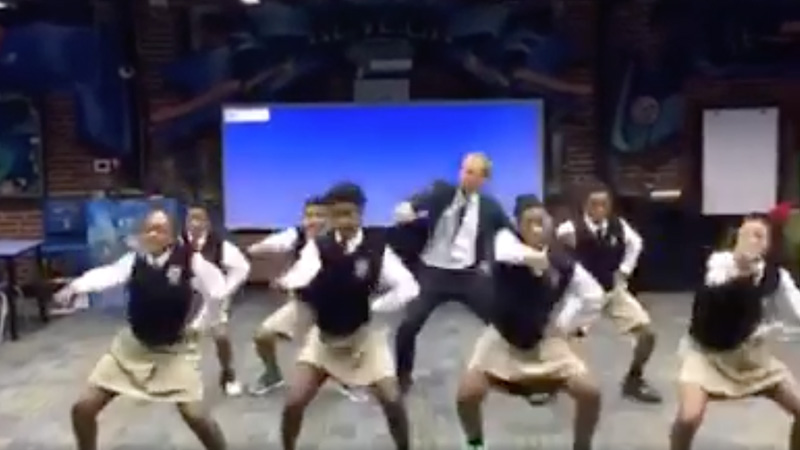 A few days ago, Ron Clark, an Atlanta educator and founder of the Ron Clark Academy in ATL, shared a video on Facebook of himself dancing with some of his students, and the clip has instantly become the Internet’s latest viral sensation.

Ron Clark, a former national teacher of the year, opened the private middle school named after him in 2008. A brand new $2.7 million wing was opened last year, and Clark described it as “magical” and having a “sort of Harry Potter theme.”

“It has a two-story dragon skeleton, trap doors, secret passageways, huge Panasonic display walls, a gymnasium that has fire on the floor, state-of-the-art technology and a laser and fog show,” the school’s co-founder Kim Bearden said.

“I wanted to create a school where you could feel the spirit,” Clark said about his school in an interview with CBS. “I wanted kids to walk into the school and say, ‘I love coming here.'”

And the Ron Clark Academy’s fun spirit can be seen on full display in the viral video of Clark and his students doing DLow’s “Bet You Can’t Do It Like Me Challenge.”

Part of the reason the video has gone viral so quickly (it has over 3.6 million views to date) is the fact that Clark is doing the “whip,” the “nae nae,” the “milly rock” and the “hit the quan” along with his young students surprisingly well.

We don’t know about you, but we would love to be students at the Ron Clark Academy!