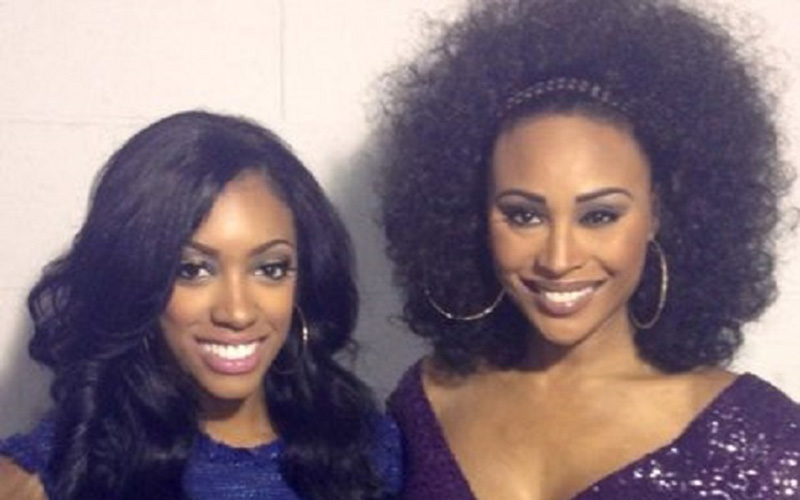 Sounds like Cynthia Bailey is through being a pushover and has finally gotten enough. But unfortunately for her, that new backbone she’s grown over the past couple of seasons may have gotten her in big trouble this time.

While shooting a scene for the upcoming eighth season of “Real Housewives of Atlanta,” Cynthia kicked castmate Porsha Williams in the stomach after a heated confrontation.

And you already know the whole thing was caught on tape!

TMZ has the scoop:

We’re told Porsha Williams was on a boat in ATL with fellow castmate Cynthia Bailey when things got hot.

The 2 women began arguing about nothing and Porsha started calling Cynthia a bitch. Cynthia tried to disengage, walking to the other side of the boat, but in true form Porsha followed.

Porsha got in Cynthia’s face, and that’s when Cynthia exercised self-defense, kicking Porsha in the stomach. Producers came in before Porsha could react and restrained her.

As for injuries … Porsha went to the hospital, where she scored pain meds. And big surprise … the fight was captured on camera.

Now producers are scrambling to figure out whether to demote Cynthia to “friend of the cast” with reduced pay or keep her on as a full cast member, which she’s been since Season 2.

Bravo apparently has a zero tolerance policy when it comes to extreme physical violence (the most you can probably do is throw a drink or something), and producers are reportedly looking over the footage and will determine if Cynthia deserves to be punished for violently attacking another cast mate.

We’re told producers want to see just how bad (or good, for ratings) the fight was … and there’s a possibility Cynthia could be demoted to the dreaded ‘friend of the cast’ title — as opposed to full cast member. And yes, that would mean a cut in pay too.

As for why PW’s neck isn’t on the line? We’re told there’s no rule against antagonizing — hell, that’s the meat of the show — but getting physical crosses the line.

If you’re a regular “RHOA” viewer, you’ll remember the same thing happened to Porsha when she attacked Kenya during the season 6 reunion.

A source tells E! News that Porsha does not plan on pressing any charges against Cynthia for the stomach kick and “everyone just wants to put it behind them.”

The insider added, “There’s a lot of filming left to do and they just want to move forward.”