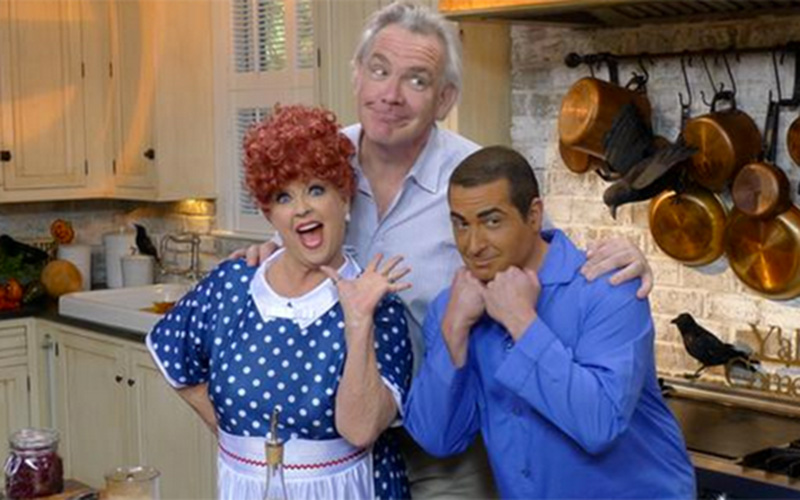 It’s been two years since Paula Deen‘s career imploded after she admitted to using racial slurs towards African Americans, and it looks like the former Food Network star still has not learned her lesson. Racism equals NOT COOL, bro.

Tuesday morning, Deen tweeted the above photo for #TransformationTuesday — an image of her and her son Bobby dressed up as Lucille Ball‘s character and Ricky Ricardo (played by Cuban-American Desi Arnaz) from “I Love Lucy,” complete with what many blogs and media outlets are calling “brownface.”

As any one should know in the year 2015, wearing blackface, or in this case, “brownface,” is a no-no. But apparently Paula Deen (or the person running her social media accounts) didn’t get that memo. After the dumb tweet created a shit storm online, it was promptly deleted and the person behind the posting was fired.

“Paula immediately had this picture taken down as soon as she saw the post and apologizes to all who were offended,” Deen’s spokesman told The Huffington Post. “As such, Paula Deen Ventures has terminated their relationship with this Social Media Manager.”

Paula Deen was first outed as a racist in 2013 after court documents from a former employee’s lawsuit against her revealed that she admitted to using the N-word multiple times in reference to African Americans.

As a result, Deen was dropped from a number of lucrative endorsement deals and she went on an apology tour, tearfully declaring on the Today show “I is what I is.”