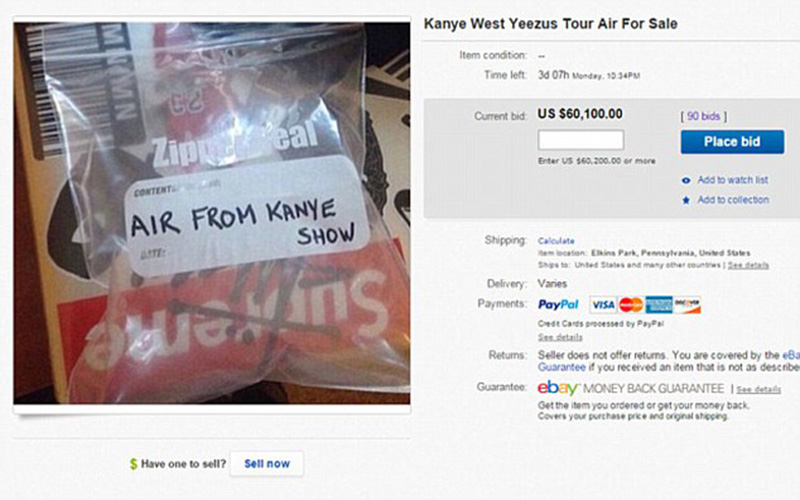 How much money would you spend on a bag of air from the concert of your favorite rapper? Is $60,000+ too far out of your budget?

An eBay auction purporting to sell a plastic Ziploc bag filled with air from a Kanye West concert went viral on the Internet earlier this month after bids reached over $60K.

According to Daily Mail:

The bizarre memento, which has now been removed from the auction site, comes from an unspecified concert and was first listed last Sunday for $5.00. However, the price continued to climb as more than 90 people bid on the “Kanye West Yeezus Tour Air.”

It’s unclear as to what is actually so special about the bagged air, which was listed as coming from Elkins Park, Pennsylvania. The seller’s only description read: ‘Held bag open and sealed air in.’

“Air From Kanye Show” was written in black on the plastic baggie.

Now, before you give up on humanity altogether, we should let it be known that the whole thing was a joke. Complex was able to get in touch the person responsible for that expensive bag of air.

selling bagged air from the yeezus tour. i kno i got ktt dudes followin me so offer up paypal ready only. dm 4 info pic.twitter.com/jXHBD5w8mt

And just months later, here’s Kim Kardashian tweeting about it:

WOW he can sell anything! Lol RT “@Femail: $65,000 for a bag of air from a Kanye West concert http://t.co/YnZapfk3id pic.twitter.com/tMfw16rCXP”

We had to find out the story behind it, so we hit up @thugtear, a.k.a. G. Hassan, to get the backstory. Last year, one of his friends missed the Yeezus show in Toronto.

“Basically, every time we talk about Kanye I bring up the fact that she missed out on her chance to meet God,” he said over email. “Last month I decided to message her and tell her I found some tour merch and that I’d be willing to sell to her for a decent price (please don’t judge me). I sent her a picture of bag of air, and after a couple laughs I realized the shit was pretty funny so I tweeted it.”

Some people found it funny, and others thought he was deadass serious. The photo ended up on Tumblr (“Dude did like 60k. I’m still very salty,” he said) and, long story short, it went viral. “Part of me felt sadly accomplished,” Hassan said over email.

“Fast forward to last week, I guess someone posted it on eBay and people started bidding wild amounts. Everyone on my Facebook was re-posting it. My brother called me because he recognized the picture and my laptop in the background. Kids at my university were wildin’. Even Kim K decided to comment…nothing was the same after that. The internet kinda broke.”

We asked him to clarify his thoughts on the last month or so. “I don’t really aspire to be some sort of Internet troll,” he said. “I tweet to try and help balance out the time I spend studying the unnecessary shit my program requires me to. When I tweeted it, I didn’t really think it was gonna blow up, but I guess people actually believed I was selling air.

“It’s kinda like the whole Paul McCartney situation…when people were tweeting about him being a new artist and White America fell apart. The only thing that bothers me is the thought of people using this funny joke to vilify Kanye. Dude deals with enough shit already.”

Hassan found some insults funny. (“One dude even said that my bag of air was an example of excessive idolatry and that the return of Jesus Christ was imminent,” he said.) But the one thing he’s taking away from everything is that since Kim tweeted it, it probably made Kanye laugh.

“Other than that, my existence now hinges on whether or not Kanye raps about this,” he said.