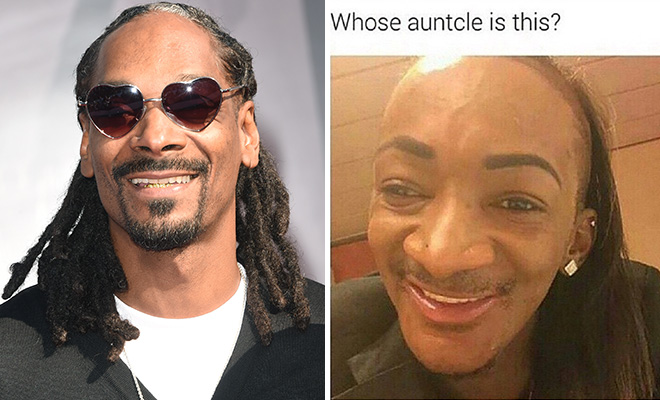 I think we’re all aware by now that Snoop Dogg is the KANG of roasting people on Instagram.

Everyone from Iggy Azalea to his nephew Wiz Khalifa has been on the receiving end of a good ol’ roast from the Doggfather, and at times Snoop even makes fun of himself.

Now a guy named Cortez Booze says he plans on suing Snoop for making him the butt of his jokes, which he claims has caused him to suffer from gay-bashing.

Cortez Booze tells TMZ … 5 days ago the rapper posted a pic of him on Instagram with the caption, “Whose auntcle is this?” The pic triggered a torrent of hate … people calling him f*****, shemale, confused, ugly, punk and a host of other slurs.

Cortez went to the folks at Instagram and reported the pic as inappropriate, but it’s still up.

So now he’s pulling out the gunz … the legal variety. Cortez has hired a lawyer and plans to duke it out with the Dogg in court.

“Auntcle” though? That damn Snoop is a fool.

But the funniest part of this whole thing may be the fact that dude kinda looks like Snoop, no?