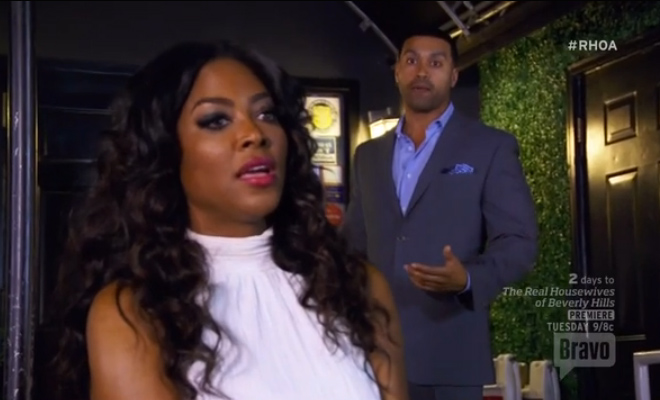 Poor Kenya Moore. For the past three seasons, she’s been treated like the Scarlet Witch of RHOA. And this was in large part due to claims made by Apollo, that Kenya propositioned him with oral sex one time while the two were out in L.A.

In the second episode of the seventh season of “Real Housewives of Atlanta”, Apollo decides that he needs to make things right with Kenya before he goes off to prison. While everyone is gathered at the new Bar One location (long story, y’all) in celebration of Cynthia’s EBONY spread, Apollo comes through to wish her well.

He runs into Kenya (and her new bestie Claudia Jordan) along with Cynthia, Kandi and Todd. Kenya bolts when he enters the room and complains about Apollo’s presence to Claudia while they’re in the bathroom.

Kenya decides that she’d like to make a quick exit rather than sit on the couch and have an awkward night with Apollo so she quickly returns to bid Cynthia adieu. As she heads out the door, Apollo calls out to her and asks to have a private conversation with Kenya.

Her face says it all. Cynthia’s jaw nearly dropped to the floor and she scurried back inside to tell Kandi, Todd and Peter that Apollo had finally come clean and admitted that the whole fuss about Kenya offering him head was nothing but a fairytale. Kandi jumped up and ran to confront Apollo about this because lord knows she’s been holding on to a whole lot of hate for Kenya over this mess.

Apollo, with the self-awareness of a five year old who’s just had an accident on himself during playtime, admits that he just confessed to making the whole thing up. He looks horribly uncomfortable while doing this, but he doesn’t offer any spin on it.

When Peter, Todd and Kandi give Apollo shit for stirring all of this mess up in the first place and complain that they’ve insulted Kenya on his behalf, Apollo goofily grins and says, “Well I appreciate it.”

Phaedra sure knows how to pick ’em.

After Apollo clears the air with Kandi and co., he returns outside and tries to apologize to Kenya again. This time, he FINALLY admits that they never met in L.A. and you can see the 500-lb. burden is lifted from Kenya’s shoulders. Kenya politely wishes Apollo well but she says she won’t truly feel vindicated until Phaedra apologizes to her as well.

Considering Phaedra’s inability to show her vulnerability, Kenya shouldn’t hold her breath waiting on that apology. It’ll probably take 3 more seasons for that to happen. If you find yourself at 46 years old hot gluing a Malibu Barbie wig to your head and squeezing your middle-aged body into a corset so you can gyrate onstage with a bunch of 20-something year olds in a kitschy Las Vegas hotel, you might be losing at life.

Although NeNe Leakes is doing her darnedest to spin her stint with Zumanity as a come-up, watching the show in action proves that it’s very much several steps down from being a working actress on a scripted series on a major network.

This is, for all intents and purposes, just a notch or two up from performing on a gay cruise ship. NeNe’s is supposedly playing the “Mistress of Sensuality,” but there’s no way her moose face and Maytag-refrigerator-shaped body is inspiring lust in anything other than caribou in the wild. Nothing could inspire erectile dysfunction more than this. Do better, Cirque du Soleli. Do better.

Other things that were touched on in this episode included Kandi buying a new house for Mama Joyce because she didn’t like the OTHER house she got for her. And Brandon paying Kenya visit to gossip about Apollo and joke about the rise of beige-on-beige crime. Oh, and to freestyle Kenya’s next viral hit, “Really, Bitch?”

The show was light on Porsha but it looks like we’ll get some screen time from her next episode when Cynthia confronts the former Mrs. Stewart on the shady comments she made about Peter and Cynthia in public.