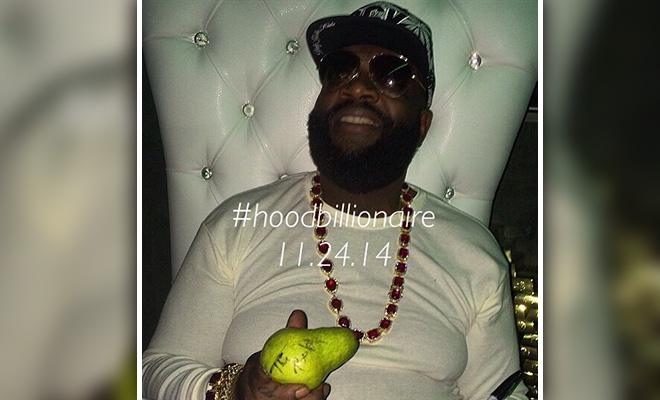 A fan recently spotted Rick Ross out, and asked the rapper to autograph pear for them. And guess what? HE DID IT!

To the uninitiated, Rick Ross signing a pear sounds stupid. So let’s give you the backstory.

Back in May, UK radio personality Tim Westwood interviewed Rick Ross before a concert in London, and the two discussed the rapper’s recent weight loss.

Ross told Westwood, “The most I used to do for exercise was stand up to count the money. But now they give me fruit to eat. I forgot what fruit tasted like… I eat pears now, and shit like that.”

Then came one of the greatest quotes of 2014: “Shout out to all the pear…”

Of course someone captured the soundbite on Vine and the clip has now gone viral:

And from there came a bunch of parodies and hilarious mash-ups:

Now, the world has come full circle, and Rick Ross is autographing pears. SHOUT OUT TO ALL THE PEAR!

If you happen to be in an area where Rick Ross frequents, be sure to take a pear with you, and do us all a favor and ask him to autograph it. Then send pics to tips@gossiponthis.com!