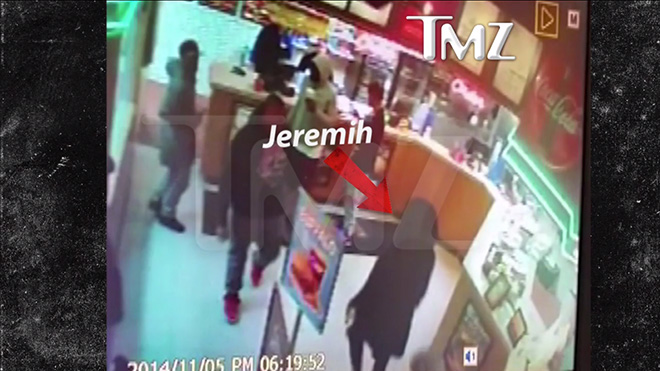 R&B singer Jeremih and his crew made headlines last week after they were reportedly involved in an altercation at a Fuddruckers restaurant in Billings, Montana.

In a video clip that has surfaced online, a person from the singer’s entourage can be seen throwing beer at a Fuddruckers employee behind the counter, and when there’s no more beer left to throw, he just throws the bottle for good measure. Jeremih is seen walking up to the counter and throwing something as well.

On Friday, TMZ reported that the “Birthday Sex” singer and his crew caused $700 worth of damage (and took a frier out of commission for an hour) in the beer-tossing incident, which came about because they got pissed over a young female employee turning down their advances and telling a manager that they made her feel uncomfortable.

The manager of the Fuddruckers tells us … Jeremih and his crew got pissed after they started hitting on a cashier, who complained to her manager she felt uncomfortable. The manager asked them to move to the back — away from the employee — and they went nuts, grabbing the Fuddruckers mic and crying racism.

The manager says he tried to give them their money back to calm the situation … but that didn’t work and that’s when the bottle-throwing began.

No arrests were made, and later, Jeremih took to his Twitter accusing the burger chain of “blatant racism.”