GOSSIPONTHIS.COM Celebs What Happened When Bill Cosby Asked Twitter to Meme Him 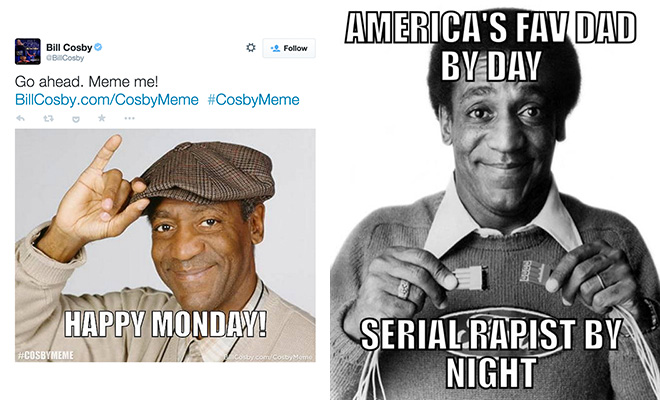 Bill Cosby has been accused of drugging and sexually assaulting more than a dozen women, so it was probably a bad idea for him (or whoever is running his Twitter page) to ask the Internet to “Meme” him, you know, considering he’s an alleged serial rapist and all.

Needless to say, the idea did not go very well. Bill Cosby and Co. got their memes, alright, but not in the way they expected.

Most of the memes focused on Cosby’s 2006 rape lawsuit settlement, in which he was accused of drugging and sexually assaulting at least 13 women — a topic that has come back to the surface following comments by comedian Hannibal Buress at a show in Philadelphia last month:

“Thirteen. It’s even worse because Bill Cosby has the fucking smuggest old black man public persona that I hate. He gets on TV, ‘Pull your pants up black people, I was on TV in the 80s! I can talk down to you because I had a successful sitcom!’ Yeah, but you rape women, Bill Cosby, so turn the crazy down a couple notches.

“I guess I want to just at least make it weird for you to watch Cosby Show reruns. Dude’s image, for the most part, is a public Teflon image. I’ve done this bit on stage and people don’t believe me, people think I’m making it up. … When you leave here, Google ‘Bill Cosby rape.’ That shit has more results than ‘Hannibal Buress.'”

Bill Cosby’s original tweet asking to be memed has since been deleted (obviously), but there’s no stopping the Internet once it gets going.

Still waiting on my @BillCosby meme to get approved! I wonder what's taking so long…#CosbyMeme pic.twitter.com/3RQrC3s7v9

As Daily Dot put it, “Bill Cosby really shouldn’t have asked Twitter to meme him.”