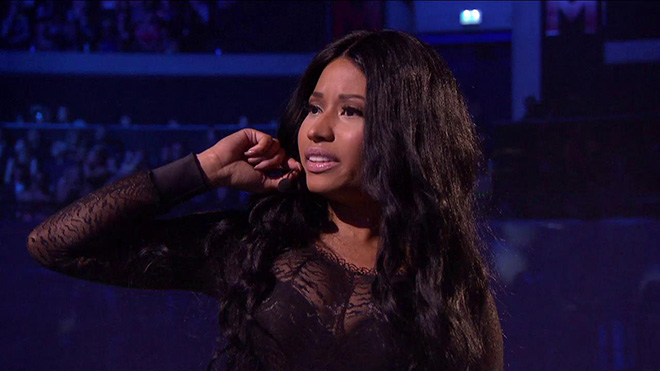 Nicki Minaj hosted the 2014 MTV Europe Music Awards — which aired from Glasgow, Scotland Sunday night (Nov 9) — and she also hit the stage to perform a three-song medley featuring music from the past and the present.

Wearing nothing but lace and panties, Nicki kicked off the performance with her 2011 hit “Super Bass,” and before ending with her latest hit “Anaconda,” the MC premiered the next single (possibly?) from her upcoming album The Pinkprint called “Bed of Lies,” with featured artist Skylar Grey playing on the piano.

The timing of the song’s debut is interesting, considering Nicki just broke up with her non-boyfriend Safaree Samuels after going all Jasmine Sullivan on the car she was letting him drive. And her first verse sounds like it’s all about that relationship:

“You could never make eye contact. Everything you got was based off of my contacts. You a fraud, but I’ma remain icon-stat. Balenciaga’s on my boots with the python strap.

“Cause I was doing it for us, I told em fuck the public. Couldn’t believe that I was home alone, contemplating. Overdosin, no more postin, no more toastin over oceans.

“They say you don’t know what you got til it’s gone. They say that your darkest hour comes before your dawn. But there was something I should’ve asked all along. I’ma ask on the song.”

We’ll have to wait until the song comes out to hear the second verse, but in the meantime, watch Nicki’s 2014 EMA performance above!