GOSSIPONTHIS.COM Celebs Joan Rivers Wanted Her Hair to Blow Like Beyoncé’s at Her Funeral 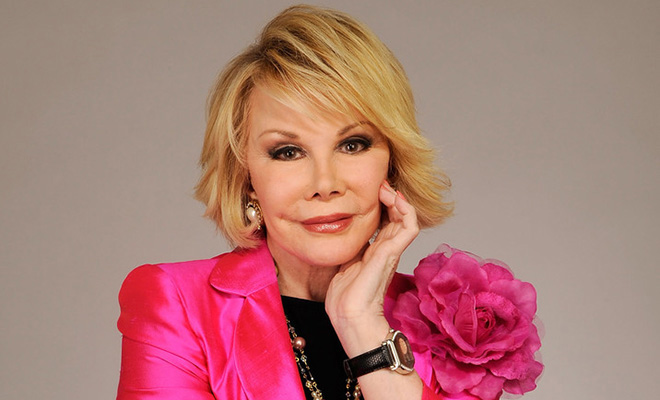 Joan Rivers passed away last Thursday (Sep 4), and the 81-year-old legendary comedienne dedicated an entire chapter of her 2012 book “I Hate Everyone…Starting With Me” to death and funerals.

From the chapter, we found out Rivers loved funerals and obituaries, and she hated “people who die of natural causes.”

Also, since her passing, a notable quote from the chapter has been making the rounds in the media, and among other hilarious things only Joan Rivers would say, she hoped that her own funeral would feature a wind machine so that “even in the casket [her] hair is blowing just like Beyoncé’s.”

When I die, I want my funeral to be a huge showbiz affair with lights, cameras, action…I want Craft services, I want paparazzi and I want publicists making a scene! I want it to be Hollywood all the way.

I don’t want some rabbi rambling on; I want Meryl Streep crying, in five different accents. I don’t want a eulogy; I want Bobby Vinton to pick up my head and sing “Mr. Lonely.”

I want to look gorgeous, better dead than I do alive. I want to be buried in a Valentino gown and I want Harry Winston to make me a toe tag. And I want a wind machine so that even in the casket my hair is blowing just like Beyoncé’s.”

Here are more hilarious quotes from the book (via Mashable):

On obituaries
“I love the obituaries. To me, obituaries are just wedding announcements without the pictures. I read the obituaries carefully, the way Lindsay Lohan reads her Miranda rights.”

On people who dies of natural causes
“I hate people who die of natural causes; they just don’t understand the moment. It’s the grand finale, act three, the eleven o’clock number — make it count. If you’re going to die, die interesting! Is there anything worse than a boring death? I think not. When my time comes I’m going to go out in highs type. I have no intention of being sick or lingering or dragging on and on and boring everyone I know. I have no intention of coughing and wheezing for months on end. One morning you’ll wake up and read a headline: Joan Rivers Found Dead…On George Clooney’s Face. Clooney Was So Bereft All He Could Say Was, ‘Xjfhfyrnem.'”

On funerals
“I love funerals! To me a funeral is just a red carpet show for dead people. It’s a chance for mourners from all walks of life to accessorize basic black, and to make a fashion statement that is bold enough to draw attention away from the bereaved but subtle enough so that no one knows that it’s happening. And, it’s a great way to have quiet fun.”

On people who offer condolences
“I hate people who try to make you feel better. Like the neighbor who says, ‘Don’t forget, the first part of ‘funeral’ is ‘fun!’ Or the minister who says, ‘He’s in a better place now.’ I’m tempted to yell out, ‘No he’s not. He had a house in the Hamptons. What’s wrong with you?””

On the pick-up scene at funerals
“As I get older, I’m going to a lot more funerals, and let me tell you something, it’s a great pick-up scene. A graveside funeral is live eHarmony for the bereaved.”

This most definitely goes without saying, but there will never be another Joan Rivers.