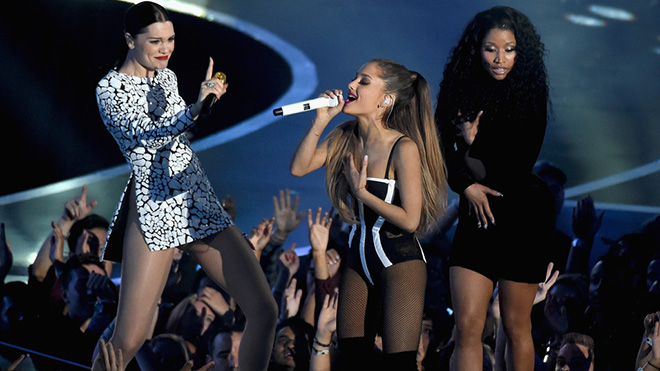 Kicking off the 2014 MTV Video Music Awards, Nicki, Jessie and Ariana teamed up for a nearly seven-minute set and showed off some major girl power all at the same time.

Ariana was the first to hit the stage and she performed her new single “Break Free,” which was followed by a jaw-dropping performance of Nicki Minaj’s “Anaconda.” Jessie J then capped the whole thing off with “Bang Bang,” as she was joined by Ariana and Nicki for the big finale.

It looks liked Nicki was dealing with a pretty serious wardrope malfunction too … because when she came back out, she had to hold up her dress, something that will likely end up being one of the biggest moments of the night.

Earlier in the evening before the show, Nicki, Jessie and Ariana premiered the video for “Bang Bang.”

Watch the VMA performance up top!