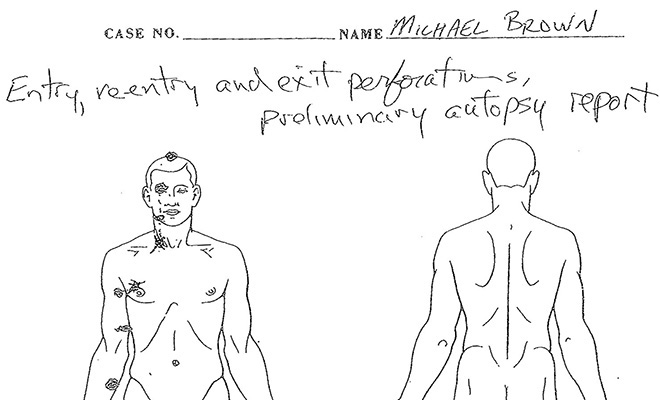 A private autopsy was recently conducted on Michael Brown‘s body, and the report has been released, revealing that the 18-year-old was shot at least six times in the head, torso and arm.

According to the autopsy report, all shots were fired into the front of Brown, who was hit at least three times in the face and four times in the right arm.

Dr. Michael M. Baden, a former chief medical examiner in New York, conducted the autopsy and found a gunshot wound at the top of Brown’s skull, which suggested “his head was bent forward when it struck him and caused a fatal injury,” the New York Times reported.

Baden flew to Missouri Sunday (Aug 17) at the request of Brown’s family to conduct the autopsy separately from local authorities.

From the New York Times:

Dr. Baden said that while Mr. Brown was shot at least six times, only three bullets were recovered from his body. But he has not yet seen the X-rays showing where the bullets were found, which would clarify the autopsy results. Nor has he had access to witness and police statements.

Dr. Baden provided a diagram of the entry wounds, and noted that the six shots produced numerous wounds. Some of the bullets entered and exited several times, including one that left at least five different wounds.

“This one here looks like his head was bent downward,” he said, indicating the wound at the very top of Mr. Brown’s head. “It can be because he’s giving up, or because he’s charging forward at the officer.”

One of the bullets shattered Mr. Brown’s right eye, traveled through his face, exited his jaw and re-entered his collarbone. The last two shots in the head would have stopped him in his tracks and were likely the last fired.

Dr. Baden also said the bullets didn’t appear to have been shot from very close range, as there was no gunpowder present on Brown’s body.

He also told reporters that Brown, who was not given medical attention, would not have survived the shooting even if he had been taken to the hospital right away.

In addition to the local and private autopsies on Mike Brown’s body, the Justice Department will also conduct its own autopsy due to “the extraordinary circumstances involved in this case and at the request of the Brown family,” a department spokesman said.

“The sheer number of bullets and the way they were scattered all over his body showed this police officer had a brazen disregard for the very people he was supposed to protect in that community,” Benjamin L. Crump, a lawyer for Brown’s family said. “We want to make sure people understand what this case is about: This case is about a police officer executing a young unarmed man in broad daylight.”