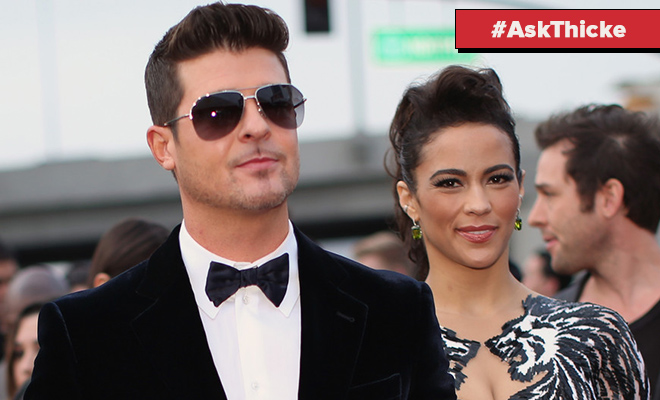 Celebrities and public figures often use Twitter to “feel closer” to their fans and the general public alike, but sometimes the freedom of the popular micro-blogging network results can backfire in a number of (usually hilarious) ways.

On Monday (Jun 30), VH1 asked Twitter to submit their “burning questions” to Robin Thicke for a Q&A session using the hashtag #AskThicke.

Have a burning question for @robinthicke? Submit your ?s for tomorrow’s Twitter Q+A using #AskThicke! pic.twitter.com/LwWKWlBysg

Normally, this would be a good idea, considering Thicke’s album was coming out the next day, and these days, artists need all the promotion they can get. But VH1 and Thicke’s team soon realized how bad their idea actually was.

As it turns out, Twitter did, in fact, have several burning questions for Mr. Thicke: questions about consenting to sex, his rapey lyrics, his failed marriage with his estranged wife Paula Patton, the fact that he’s begging/stalking the hell out of her, why he chose to wear a Beetlejuice outfit the VMAs last year, etc…

Here are some of the highlights:

#AskThicke It might seem like some of the questions on this hashtag are cruel and abusive but Robin, I know you want it

Is the creepy stalking thing a sick publicity stunt at your ex’s expense, or just a thoughtless grab for attention and relevance? #AskThicke

#AskThicke don’t you think this is an ironic hashtag considering you’re not one for asking?

#AskThicke Did you really write a rape anthem as a love song for your wife and are you still wondering why she left you?

@VH1 @robinthicke From writing an obsessive stalker song to blurring lines of consent, why do you continue to be such a creep? #AskThicke

The world my kids will grow up in is less safe because of Blurred Lines. How can you fix that @robinthicke @Pharrell? Delete it? #AskThicke

#AskThicke If we say your name three times, will you disappear? pic.twitter.com/htcvRtuBNX

What form of sexual or emotional abuse will you be normalising in your next jaunty hit? #AskThicke

How many naked women did it take before you stopped seeing them as people & instead saw them as YouTube hits? #AskThicke

#AskThicke if a woman says no but ‘you know she wants it’. How many years in prison would you serve for statutory rape?

When is he going to leave that woman alone RT @VH1 Have a burning question for @robinthicke? Submit your ?s using #AskThicke!

#AskThicke Can I punch you in the face? No? You mean yes, right? You know you want it.

On a scale of R. Kelly to Phil Spector, how do you intend to “Get Her Back?” #AskThicke

How long are you going to keep singing creepy songs about ignoring a person’s consent? #AskThicke

What part of NO don’t you understand? #AskThicke