GOSSIPONTHIS.COM Celebs Forbes Says Beyoncé is the Most Powerful Musician in the World 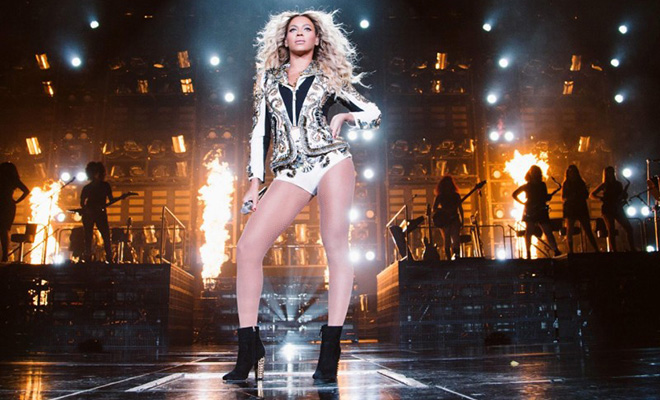 Beyoncé has been crowned the world’s most powerful musician by Forbes magazine after an amazing year that featured a massive world tour, a surprise album and several lucrative endorsement deals.

According to Pollstar, Queen B played nearly 100 shows, bringing in an average of more than $2 million PER SHOW, and she also surprised fans with an out of the blue album release last December.

She also scored several multi-million dollar endorsements with big names like H&M and Pepsi, not to mention her line of fragrances (“Heat,” “Rise,” and “Pulse”) and her clothing company House of Dereon.

All together, Forbes estimates that Beyoncé put at least $115 million in the bank between June 1st 2013 and June 1st 2014, landing her atop Forbes Celebrity 100 list, which also features names like Dr. Dre, her husband Jay Z, Rihanna, Katy Perry, Taylor Swift, Lady Gaga and more.

FORBES’ annual Celebrity 100 list ranks the top stars from the worlds of movies, TV, music, sports, books and modelling based on money and fame.

We estimate earnings by talking to lawyers, producers, agents and other in-the-know folks to figure out how much over 200 celebrities earned from entertainment-related business in the past year. That includes things like music sales, upfront pay on movies and endorsement work.

Our time frame for earnings this year is June 1, 2013 to June 1 2014. We don’t deduct for things like taxes, agent fees or the other expenses associated with being a celebrity.

We measure fame in a variety of ways. We count how many times each celebrity was mentioned in print, on TV and radio. We factor in a score from StarCount for social media power over 11 platforms including Twitter TWTR +0.1%, Facebook and YouTube.

This year we’ve also added an impact score, similar to the one we use for our Power Women list. Based on reporting by our editorial staff, the number measures the impact each celebrity has on the entertainment industry and our culture overall.

We put all of those numbers into an algorithm to come up with our final list. Justin Bieber had the highest ranking for social networking power but because of his low impact this year, he only ranked 33rd on our list, down from ninth last year.