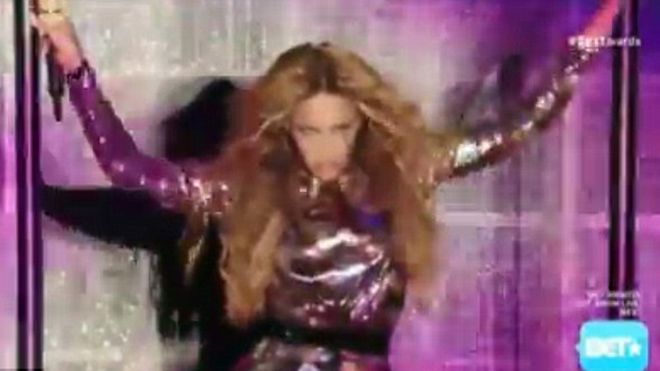 Driver roll up the partition please!

Beyoncé and Jay Z are currently “on the run,” but that didn’t stop the Hip Hop power couple from delivering a surprise performance at the 2014 BET Awards.

Though Bey and Jay weren’t actually in Los Angeles to perform live on stage, they were able to use pre-recorded footage from their “On The Run Tour,” namely their performance of a remix of “Partition,” Beyoncé’s latest single from her self-titled album, to close out the show.

Jay started off the performance with an intro verse, in which he reportedly took a dig at TMZ, rapping, “Left the curtains open for the paparazzi, a little TMI for you TMZ.” While many believe he was talking about that elevator fight with Solange, he could’ve actually been talking about paparazzi photos like this, as HuffPost Entertainment pointed out.

After rapping his verse, Jay sat back and let his sexy wife take center stage as she danced seductively on a pole.

Watch the performance above!