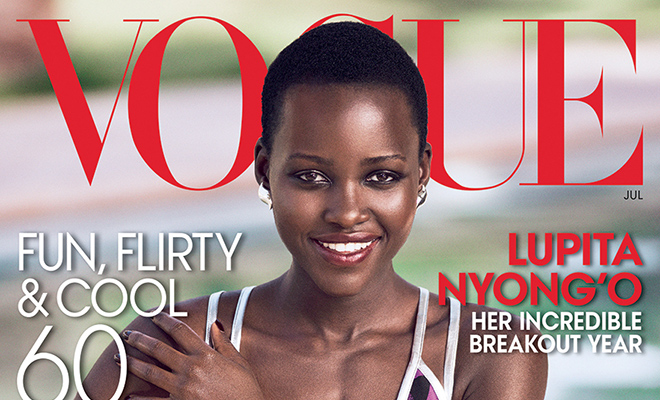 2014 has arguably been the best year ever for “12 Years A Slave” actress Lupita Nyong’o, who has so far won an Oscar, been named People magazine’s “Most Beautiful Woman in the World,” and now has landed her very first cover of fashion magazine staple Vogue, and we’re only six months into the year! Nyong’o, 31, who recently confirmed that she’ll be appearing in the new “Star Wars Episode VII” movie, as well as a live-action version of The Jungle Book and a movie adaptation of the Chimamanda Adichie novel “Americanah,” wears Prada, Jonathan Saunders and Givenchy in the shoot for Vogue’s July 2014 issue and talks about her highly eventful year, which no doubt was capped off by that big Oscar win. Via the UK’s Mirror:

She says: “It just feels like the entertainment industry exploded into my life. People who seemed so distant all of a sudden were right in front of me and recognising me — before I recognised them!”

She also described her recent “very confusing, very numbing” Oscar win and how she felt when they said her name.

Lupita also referenced actress Jennifer Lawrence’s infamous fall(s) at the Oscars, as she tried not to follow suit.

Click Here for more from Lupita Nyong’o’s Vogue interview, where she also talks about becoming the face of Lancôme and much more.