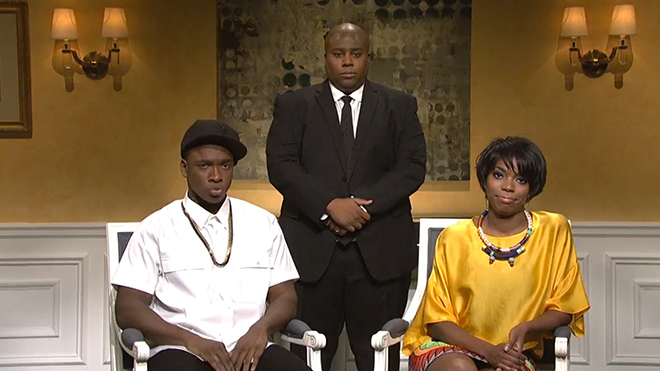 During the season finale of this weekend’s episode of “Saturday Night Live,” hosted by alum Andy Samberg, the show spoofed Jay Z and Solange‘s infamous elevator fight, which, according to the cold open skit, wasn’t a fight at all.

You see … Solange was just being a good sister-in-law by trying to get a huge spider off of Jay Z, but we couldn’t tell because there was no audio.

So to clear up the confusion, Solange and Jay Z (played by Sasheer Zamata and Jay Pharoah) showed the elevator video footage with “real audio” added.

“Oh my god, there’s a spider on you!” Solange screamed. “What?!? Get it! You know I hate spiders,” Jay Z responded. “It keeps moving!” Solange yelled in between swings. “Kick it!” Jay shouted, as Solange tried to kick him.

Maya Rudolph (another SNL alum) makes an appearance near the end of the skit as Beyoncé, appropriately dressed in black shorts and a gold top with a sexy cleavage split right down the middle, with her hand on her hip and a small breeze blowing through her wig.

Watch the hilarious skit above!