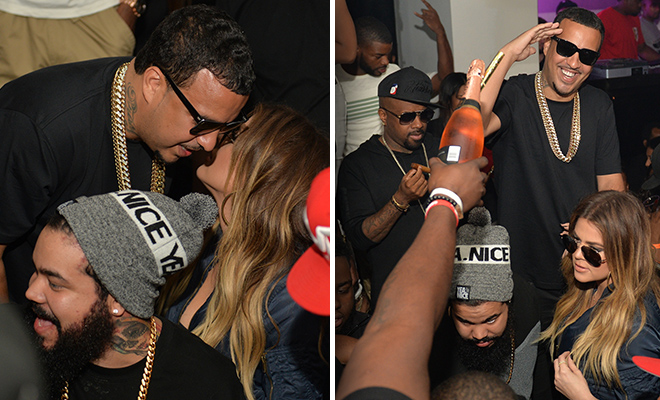 The rumored couple were spotted partying it up Saturday night (May 10) at Compound nightclub in Atlanta.

With both their shades on, the very casually dressed 29-year-olds sipped on drinks and hung out with Jermaine Dupri in the club’s VIP section, while Khloe was spotted taking photos with fans.

Khloe and French — who first stepped out publicly together last month and had been seen out together on numerous occasions before then — didn’t leave the club until about 4 a.m. and an eyewitness told Us Weekly that they were “together all night—like two peas in a pod” and “seemed very chill and laid back.”

Khloe officially finalized her divorce from Lamar Odom last December and it seems like she’s moved on pretty quickly.

According to Hollywood Life, Khloe finally introduced French to her mom Kris Jenner last Wednesday and she loved him. The two hadn’t met each other before, but they reportedly hit it off instantly while dining at Nobu restaurant in Malibu.

“They were all laughing and smiling and taking pictures after dinner. They all seemed to really have fun and Kris seemed to genuinely like French,” an anonymous source was quoted as saying.

Sounds like things are getting pretty serious between Khloe Kardashian and French Montana!

Check out the pics of them partying at Compound in Atlanta here: