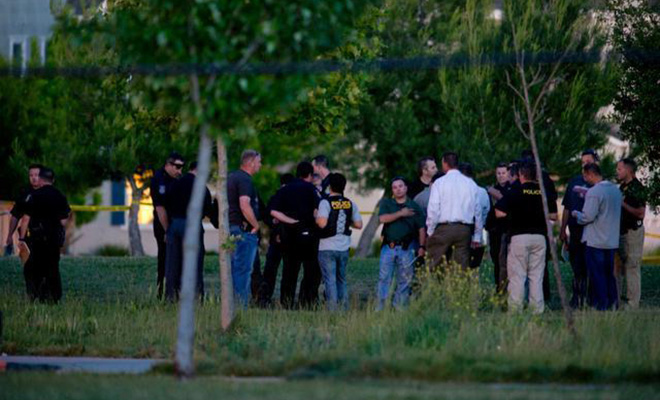 One person is dead and six were injured after a group of gunmen walked up and opened fire on a 1-year-old baby’s birthday party at a park in Sacramento, California Saturday evening.

According to CBS Sacramento, a 7-year-old child was one of the victims hit with a bullet, and an adult man in his 20’s died at the scene.

“I just dove to the ground. There was about 25-30 shots that rang out, everyone was screaming and yelling and just running all hysterical,” a witness who did not want to be identified said. “There was one kid shot in the leg, the other guy was shot who died … and there was a couple people around the corner [with] wounds to the leg and to the back.”

“Somebody called and said, ‘Don’t come to this party, they just shot this party up.’ I was like I don’t believe this. What is going on?” said Brenda Jones, whose 2-year-old grandson there.

“Some lady over there pulled a bunch of kids that were at the party, she grabbed them and pulled them into her house,” she added.

In addition to the 7-year-old, five others sustained injuries police say are non life-threatening. The shooters fled in a vehicle, and police believe the shooting to be gang-related. The Sacramento Bee reported on the sad scene:

The shooting happened at a playground with blue-and-yellow play structures and picnic tables on the edge of a newer neighborhood of stuccoed houses with tile roofs.

The victim who died was a man in his 20s. His body lay beneath a sliding board, his face uncovered, for hours after the shooting.

A large blue Cookie Monster figure was on one of the picnic tables. An inflatable playhouse had collapsed. Clothing and shoes were scattered about.

The identities of the gunmen aren’t yet known, however police believe their faces may have been captured by home surveillance cameras nearby, and they said an investigation into the shooting is underway.

Denise James, who was at the scene after the shooting, said the man who was fatally shot was her 29-year-old son-in-law.

“They came in the party and shot my son-in-law,” James told the Sacramento Bee, adding that her son-in-law had a young son who would now grow up without a father. “They took him away too early.”