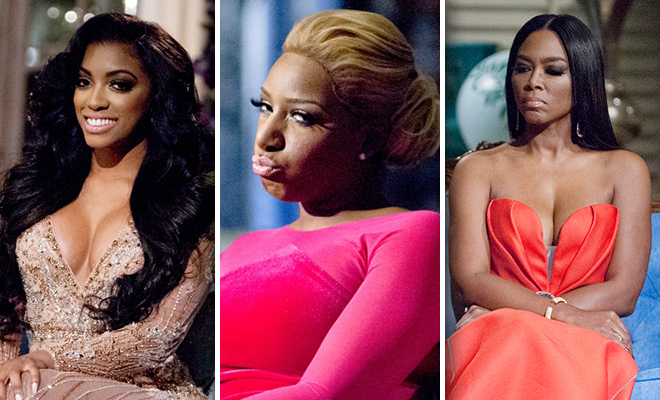 After the big blowout between Porsha Stewart and Kenya Moore finally aired Sunday night during the “Real Housewives of Atlanta” Season 6 reunion special, everyone wants to know whether or not Porsha will be fired for snatching Kenya to the ground by her hair.

Kenya claims she was “violently attacked,” but honestly, we’ve all seen worse. Regardless, there are rumors that Porsha is on the chopping block and will receive a pink slip at some point.

A few weeks ago we reported on a TMZ story that said that the ladies of “RHOA” — minus Kenya, of course — had banded together and were threatening to quit the show if Porsha was fired.

Sources tell us the women have made it clear … they’ll walk if Porsha gets fired … and we’re told NeNe Leakes and Phaedra Parks are making a play to get Kenya fired instead.

But in an exclusive interview with Essence.com, NeNe Leakes said that wasn’t true and she had no idea where that rumor came from:

“But I will say this, I don’t think that Porsha deserves to get fired based on the fight with Kenya. I do think she was on the chopping block before she got into the fight. Fighting Kenya did not help her case.”

“In my opinion, [Kenya] provoked her. She continuously put something in her face. Porsha was really upset by it. Working on a show like Housewives… it can be very dramatic. It’s hard being on a show where you work with a bunch of woman who are constantly belittling you and cutting you down.

“Kenya has called Porsha a lot of things. At the reunion she repeatedly said Porsha is dumb, and all kinds of things. [Porsha] felt belittled and she really had enough.”

On the rumors that NeNe wanted Kenya removed from the show, Nene said:

“I don’t like Kenya. TMZ or somebody caught me one night coming out of Mr. Chow’s and I said, just jokingly, they need to get Kenya off the show. But seriously, I understand the reality world. There has to be a cuckoo bird. That’s entertainment.

“I wanna see the show do very well, and I think Kenya brings an element to the show and they should have. I think all of that makes for great television.”

So with that… who do YOU think should be fired from the show? Kenya, Porsha, or neither one?