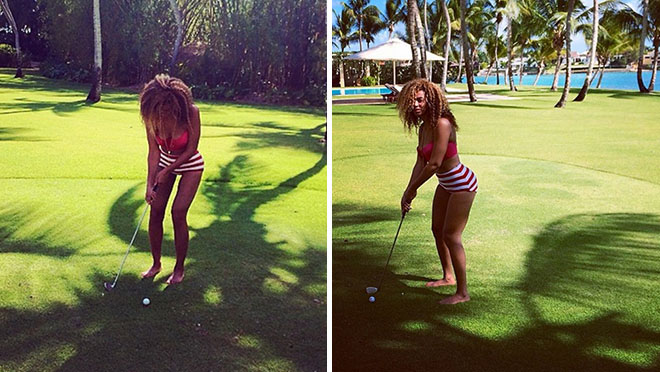 Did Beyoncé digitally alter a photo of her thighs to make them appear smaller? That’s the question fans have been asking for the past week after a photo surfaced of the singer appearing to show what is known as “thigh gap.”

And what is “thigh gap,” you ask? Well, Wikipedia defines it as “a space between the inner thighs when standing upright with both knees touching.”

Some women aspire to have a thigh gap because they believe it will increase their attractiveness, with some considering it a sign of femininity and fragility. Some go as far as to say it symbolizes the ideal body shape.

Beyoncé has been accused a photoshopping a large “thigh gap” into a photo she posted on Instagram.

If you take a look at the image above on the left, you’ll see a noticeable gap in between Beyonce’s thighs, making her legs appear thin. But on the photo on the right, her legs look normal and her natural thickness is preserved.

Shortly after Blue Ivy’s mom posted the photo, she was flooded with critical comments from fans who accused her of photoshopping the image to make her thighs look smaller.

“LOL Beyonce, the modern day feminist – and #1 self love advocate, photoshopping herself a thigh gap,” another said.

“I have lost every ounce of respect for Beyonce over this thigh gap story. She is disgraceful!!!”

And: “Really @Beyonce? We all love your thick thighs. NO reason to photoshop a thigh gap in there.”

It could, however, be the angle of the photo and her golf stance making it appear as though a thigh gap was photoshopped into it, as this Jezebel writer points out:

At The Frisky, it’s noted that “the slight wavy unevenness and a certain sharpness where there should be a natural curve indicate that the clone stamp tool was probably used to whittle down Bey’s thighs and butt area.” Some people on Twitter agree. Hmmm.

Also, it’s not as though Beyoncé runs her own Instagram (she’s a very busy woman). She did not run off the golf course like, “Fire up the Photoshop, Jay, we’ve got some clone-stamping to do before I share this image with my many fans on Social Media!!” So there’s that, too.

Do you think Beyoncé photoshopped “thigh gap” into her photo?