GOSSIPONTHIS.COM Celebs Pharrell Williams: “I’m Proud of All My Work, But ‘Happy’ Changed Me” 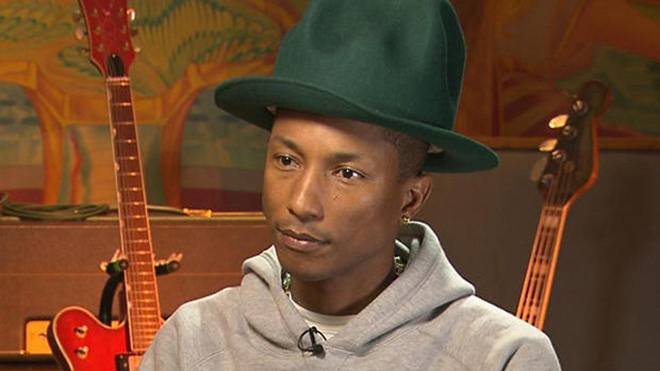 At 41 years old, Pharrell Williams is doing what most people his age could only dream of.

Besides the fact that Pharrell looks like he drinks from the fountain of Youth (either that or he’s a vampire), over the past few years, virtually everything he has touched has turned into gold.

In addition to Pharrell singing on and co-writing Daft Punk’s summer smash “Get Lucky,” and producing and co-writinh Robin Thicke’s mega-hit “Blurred Lines” … the jack of all trades also landed a number one hit with his “Happy” single.

But despite all of the success Pharrell has gained, he remains humble and true to himself.

Check out a few excerpts from a recent interview Pharrell did with CBS News’ Anthony Mason, in which the musical genius speaks on his single “Happy” blowing up, The Neptunes not working out as a group, his grandmother urging him to get serious about music, his mountain hat designed by Vivienne Westwood, changing the direction of his music and more.

On his hat — designed by Vivienne Westwood — becoming famous on Grammy night:

“One of my managers says, ‘The hat has its own Twitter.’ What?!?’ … I can’t tell you why people fixated on Vivienne Westwood’s hat, ’cause it’s not mine, it’s hers, right?”

On his vibrant clothing style:

“I suppose I’ve always had my own way. You know, they always say ‘Never judge a book by its cover.’ But the cover does say a lot. I’ve always been, like, an extrovert. If you think color, you kind of dress in color.”

On how his grandmother and band teachers helped mold him into the musical genius he is today:

It was his grandmother who urged him to get serious about music: “She had been diagnosed with cancer. And I was turning 15. And she said, ‘You love the drums. Why don’t you learn how to play the drums?'”

“Yes, I do. And Ralph Copley had taught me how to play the drum set. My story is the average story, you know. It was filled with special people.”

“You’re giving everybody else credit.”

“Well, what am I without them? Just try that for a second. Take all of my band teachers out of this. Where am I? I’m back in Virginia, doing something completely different.”

“What would that have been do you think?” Mason asked.

“Struggling art teacher. Struggling because the rest of my grades were not so good. They were like Cs and D’s. And sometimes E’s!”

On The Neptunes not working out as a group:

In beginning band class he met Chad Hugo, who played sax. They formed The Neptunes. “Group wise, it just didn’t work. We were just too weird — or I was too weird at the time. I mean, hello?”

So The Neptunes produced other artists’ music, taking spare hip hop beats and infusing them with rock and pop. Their music flooded the radio.

On changing the direction of his solo music:

One of Pharrell’s few disappointments was his first solo album in 2006, “In My Mind”: “It didn’t turn out the way I wanted it to. And I blamed everybody around me but myself. And I really had to take a long study on what I was doing and talking about on that record.”

That first record was too full of ego, he says. Now 41, and married to fashion designer Helen Lasichanh, Pharrell’s new album, “Girl,” strikes a different tone.

“What changed for you?” Mason asked.

“I realized along the way that there wasn’t enough purpose in my music,” Pharrell said. “Going back and listening to Stevie Wonder songs and Steely Dan songs, you’d see that Donald Fagen had a purpose. He had an intention. Stevie Wonder was really singing about something.”

“It’s super weird. Because I’m used to being the guy standing next to the guy. I was happy being that guy! It’s weird … I’m proud of all my work and I’m thankful. But ‘Happy’ changed me.”

Released last July in the film “Despicable Me 2,” it went nowhere at first. “When they took it to radio, they were like, ‘It’s just too different.’

Walk down the street with Pharrell Williams now, and from all sides people approach him, people of every color and every age. “People walk up with their toddlers — ‘There’s the ‘Happy’ man!'” Pharrell said.

“Are you okay with being the ‘Happy’ man?” Mason asked.

“You’re going to live with the ‘”Happy” Man’ and the hat for a while. You’re okay with that?”

“What else do I have any other business being but appreciative?” Pharrell responded. “It’s not my doing.”

Read more and check out a few video clips over at CBSNews.com!