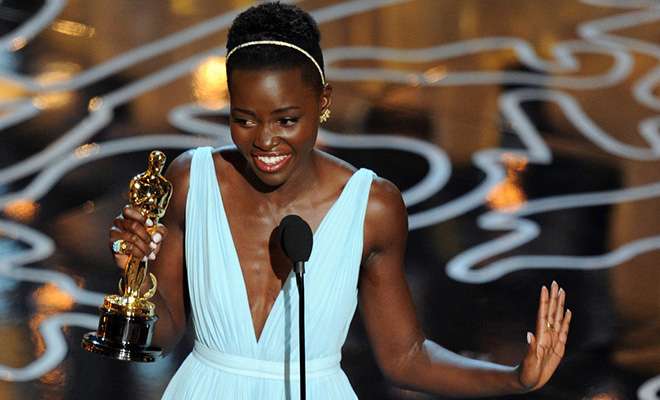 Lupita Nyong’o is a newcomer to this whole “Hollywood movie star” thing, but that doesn’t matter, because she has something most actors/actresses who have been working for DECADES don’t have (and, unfortunately, some never will): AN ACADEMY AWARD (AKA OSCAR)!

The 31-year-old actress, who received a standing ovation from the Oscars crowd, dedicated the award to the “spirit of Patsey,” the character she played in the movie “12 Years A Slave,” which later went on to win the highly coveted Best Picture award.

A clearly (and understandably) emotional Nyong’o also thanked director Steve McQueen as well as her brother, and she closed her speech with this: “I look down at this golden statue, and may it remind me and every little child that no matter where you’re from, your dreams are valid.”

Though this win is Lupita Nyong’o’s biggest, this isn’t her first. The actress, who only has two film releases to her name (one of them being a “short”) has won awards from the Screen Actors Guild and Critics Choice Awards, as well as numerous honors from Critics Associations/Societies in Hollywood, Los Angeles, Las Vegas, Florida, Georgia, New York, Washington, D.C. and many other places.

Here’s the full transcript from Lupita’s speech (via The Wire):

Thank you to the Academy for this incredible recognition. It doesn’t escape me for one moment that so much joy in my life is thanks to so much pain in someone else’s.

And so I want to salute the spirit of Patsey for her guidance. And for Solomon, thank you for telling her story and your own.

Steve McQueen, you charge everything you fashion with a breath of your own spirit. Thank you so much for putting me in this position.

This has been the joy of my life. I’m certain that the dead are standing about you and watching and they are grateful and so am I.

Chiwetel, thank you for your fearlessness and how deeply you went into telling Solomon’s story. Michael Fassbender, thank you so much. You were my rock.

I want to thank my family for your training and the Yale School of Drama as well for your training. My friends, the Wilsons, this one’s for you. My brother, Junior, sitting by my side. Thank you so much. You are my best friend. And Ben, my other best friend, my chosen family.

When I look down at this golden statue, may it remind me and every little child that no matter where you’re from your dreams are valid.

PHOTOS OF LUPITA NYONG’O AT THE 2014 OSCARS: