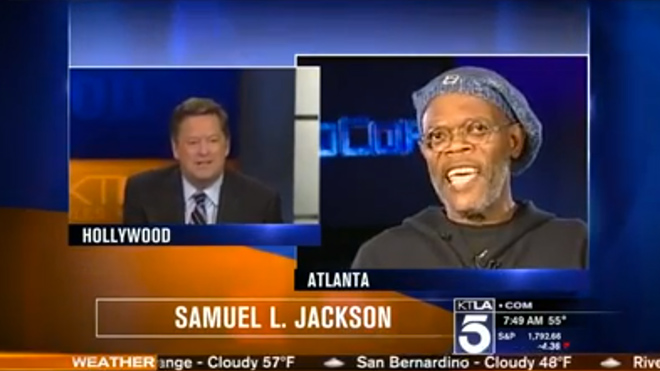 A news anchor learned a BIG lesson the other day when he mistakenly confused actor Samuel L. Jackson with Laurence Fishburne.

Unfortunately, the anchor got Sam mixed up with an ad starring Laurence Fishburne … and Sam didn’t take the mistake so lightly. And from there, things got real awkward, real quick.

What Super Bowl commercial? […] See, you’re as crazy as the people on Twitter. I’m not Laurence Fishburne! We don’t all look alike! We may be all black and famous, but we don’t all look alike! You’re the entertainment reporter? You’re the entertainment reporter for this station and you don’t know the difference between me and Laurence Fishburne? There must be a very short line for your job

Rubin, who felt both embarrassed and bad over the mixup, apologized to Jackson and anyone else he may have offended.

“We start right now with the beauty and the occasional pain of live television. First and foremost, I do know who Samuel L. Jackson is. I’ve interviewed him several times over the years, but never quite like the conversation we just had.

“I indicated to Samuel that I’d seen him during the Super Bowl, and he thought that I had confused him with the commercial Laurence Fishburne had done for a car company. Of course a “Captain America” ad had also run during the Super Bowl, but I immediately felt so dumb, I didn’t bring that up — and he gave me the shellacking that was well deserved.

“I pride myself on the fact — that unlike a lot of people who do this kind of work — more often than not, I really do know what I’m talking about. But I didn’t 30 minutes ago, and I’m really embarrassed about it, and I very much apologize to Samuel L. Jackson and anyone else who was offended for what was a very amateur mistake.”