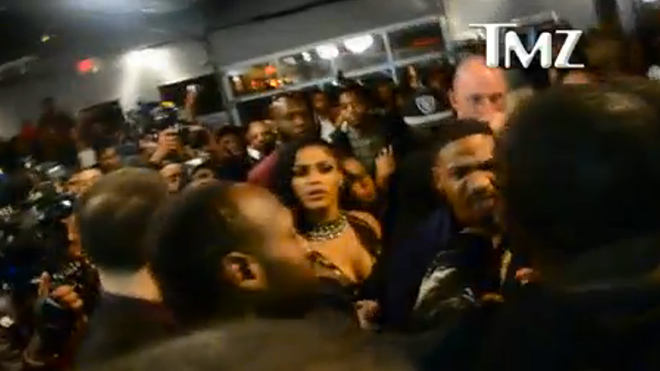 A massive brawl broke out Wednesday night during the filming of VH1’s most popular reality series “Love & Hip Hop Atlanta” that left many of the show’s stars “bloodied and injured,” according to TMZ.

“LHHATL” stars Stevie J and Benzino were hosting the grand opening of their new Atlanta bistro and bar “Sleezy & Zino’s” Wednesday night (Feb 5) when the fight broke out.

Sources close to the show tell us … the trouble began when Joseline Hernandez walked in with a girlfriend. We’re told the friend instigated an argument … and pretty soon fists were flying.

Karlie Redd was knocked out … several others suffered bloody cuts … and somebody threw a bottle at Momma Dee, hitting her in the face.

Of course VH1 cameras were there and rolling, so expect to see this play out during the third season of “Love & Hip Hop Atlanta,” which doesn’t have a set premiere date just yet, but since they’re already filming it can’t be too far away!

Until then, however, all we have is this blurry, shaky, video footage of the fight someone sent to TMZ: