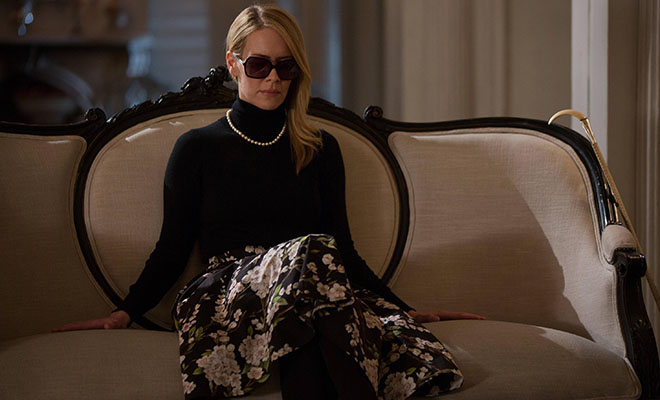 There’s a new supreme in town, and after waiting 13 episodes to figure out who that is, we finally know who she is!

The season finale of “American Horror Story: Coven” aired on Wednesday and wow did it leave us agasp.

The chiller’s third season has been largely hailed by critics and audiences. Its light-hearted tone (no, we didn’t forget those attic scenes!) made it far less difficult to watch than the second season “Asylum” and gave us far less nightmares than its debut season “Murder House.” This was largely due to “Coven’s” campy tone and ridiculous plot turns that we couldn’t help but be shocked and laugh at at the same time.

The finale displayed a subdued tone that barely picked up for most of the episode’s runtime. In all fairness, there was no shortage of action during the last couple of episodes, and this one was more about one thing, and one thing only: Determining who the hell the new supreme is.

There would have been few better ways to open the finale than with another appearance from Stevie Nicks. This time, she appears at Robichaux singing “Seven Wonders.” An appropriate tune, as all the witches are set to take part in the Seven Wonders test.

As we learned last week, Delia (Sarah Paulson) is determined to discover who on God’s green earth the new supreme is — a question we’ve been asking since the season began!

To find out the answer to this burning question, Delia subjects Zoe (Taissa Farminga), Madison (Emma Roberts), Queenie (Gabourey Sidibe), and Misty (Lilly Rabe) to a series of trials. Whichever one survives will be the new supreme.

The first test is a simple one in which the girls move a candle across the table; they all pass. The same is true of the second trial, in which they prove that they can control one another’s minds.

This is a particularly creative moment, in which Madison makes Kyle (Evan Peters) crawl on the floor and lick her boot, much to the lovesick Zoe’s disgust. When Zoe tries to disrupt Madison, she uses her powers to make Kyle strangle Zoe. In the words of Ron Burgundy, “That escalated quickly!” Now here’s where things get ugly. The gals are then forced to go into the afterlife and face their versions of hell. We saw Queenie’s fried chicken serving hell last week and now we’ve learned that Madison’s idea of eternal damnation is being cast in a network production of “The Sound of Music” (Carrie Underwood burn!).

What’s unintentionally hilarious is that Misty’s hell is dissecting a frog in front of her classmates against her will, which proves to be an utterly disturbing sequence but for Zoe, it’s Franken Kyle breaking her heart. We get it girl but the contrast between the latter two hells is extreme!

Sadly, our favorite Stevie Nicks-loving shawl wearer, is unable to make it out of her hell in time, and will now be trapped there … for all eternity. Meaning, she can’t come back this time. Damn.

The remaining girls then partake in Transmutation Tag where they get to have some fun with their powers, that is until poor Zoe ends up impaled by a fence (reminiscent of Sophia Coppola’s eerie 1999 indie “The Virgin Suicides”).

Obviously this is horrifying to watch, and given the writers’ neglect of Zoe following the first few episodes, we thought she was gone for good.

With only Madison left, Cordelia decides to go head-to-head with her and triumphs. Thankfully, Delia’s last bid for supremacy is bringing Zoe back from the dead, which she does, gaining her sight back in the process. All rejoice!

In a moment that made us cheer, Kyle later strangles Madison to death, this after she storms out of the room after failing to complete one of the Seven Wonders (Divination) promising to tell TMZ about the coven and everyone involved.

“Thank goodness!” said everyone (even if it wasn’t out loud). That’s when good ol’ Ghost Spalding — with that porcelain baby hand! — appears and offers to help him bury the body.

By now you’ve probably forgotten about that time Myrtle (Frances Conroy) killed her two co-council members and gave their eyeballs to Delia, but apparently, this is a big deal that will get a witch killed. Auntie Myrtle forces Delia to punish her, and she’s burned at the stake … again, but this time in a fierce red dress, while Queenie, Delia and Zoe sadly watch on.

Delia takes the Robichaux Academy public and it goes on to become an overwhelmingly popular place where witches are able to come out of hiding and develop their powers.

As we (and everyone else) predicted, Fiona (Jessica Lange) is still alive (well by the looks of her, she’s got one foot in the grave). This allows for a final moment between her and Delia, two characters who have no doubt had the most compelling relationship of the season.

The scene ends with Fiona dying in Cordelia’s arms. For a show so saturated in fantasy, this moment felt so rooted in reality.

Fiona then finds herself in her version of hell, which happens to be getting stuck with the Axeman (Danny Huston) in a cabin for all eternity.

Did anyone else think this wasn’t so bad? I mean, these two had some pretty good times and compared to repeated frog dissection, being in a secluded place with a guy who’s really into you doesn’t seem all that horrific. I mean, I know he has his issues (he’s the Axeman for God’s sake) but come on.

Madison: “I was stuck on a network musical, a live version of ‘The Sound of Music.’ I wasn’t even the lead, I was Liesl.”

Cordelia: “To quote the Bible, loosely, ‘When I was a child, I spoke like a child, I understood like a child, I thought like a child. But when I became a woman, I put aside childish things. Childhood is over, my girls. Put aside fears, reservations and petty things. Kick ass tomorrow.”

Madison: “I’m going back to Hollywood, where people are normal.”

Fiona: “You took my power the minute I gave birth to you.”

It was a pleasant surprise that Delia was in fact the supreme. This was one of many plot points that contributed to the episode being fan-friendly and satisfying. Of course, few would have complained if Fiona won out in the end because as in spite of the cruel things she’s done, we can’t get enough of her.

But we did expect a bit more amped up action, considering the whole premise of the episode revolved around some kind of “Hunger Games” style witch fight.

Overall, the episode did what this season has done best, presented ridiculous situations in a style that is compelling to watch. There was a dark and somber energy that made the whole thing feel like a drawn out funeral, and that’s probably no accident.