GOSSIPONTHIS.COM Tech It’s Not Just You: GMAIL IS DOWN FOR EVERYONE. TIME TO FREAK... 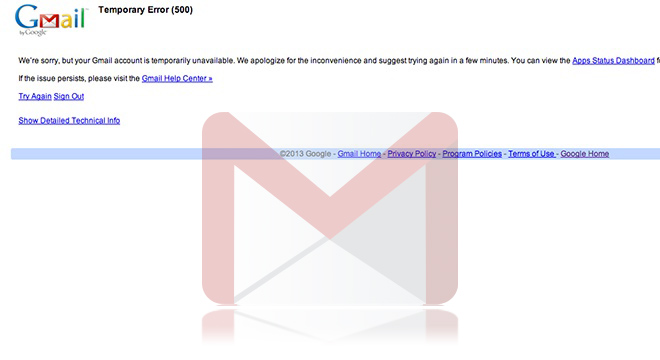 YES. And it’s not just you, either. GMAIL IS DOWN FOR EVERYONE RIGHT NOW.

Gmail is down. Guess we can all just go home.

Freaking out over Gmail being down? We have a place for you to go to kill some time: http://t.co/7eOhhdnDBu

Well, guess I’m done working for the day now that Gmail is down.

Gmail Goes Down Across The World http://t.co/oHXIxrBIXx by @drizzled

GMAIL IS DOWN. WEEKEND, HERE WE COME.

Make sure to get your Gmail-is-down jokes in before it comes back: http://t.co/Qu4y1YEXQG

You know that “rule” that if your professor doesn’t show in 15 min, everyone goes home? Let’s do that for Gmail being down. START THE CLOCK.

LOL @ the obvious shade from Yahoo!

We’re sure that since this is such a widespread problem, Google is already on it and whatever issue will be resolved quickly. HOPEFULLY.

UPDATE: Gmail’s back! And it only took “roughly” 50 minutes, according to TechCrunch (SMH… Do better Google!)

Now we can all get back to work, and world order will slowly restore itself over time.